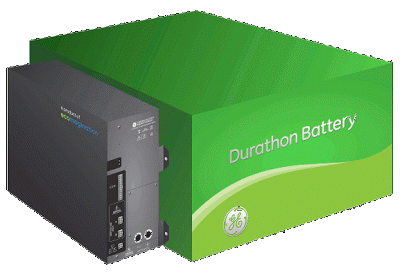 Since General Electric unveiled its Durathon Battery a few years ago, it has been considered as a breakthrough and widely recommended as the eco-friendly storage unit for the telecom towers and other outdoor units that run on hybrid and diesel engines(telecom). Lately, GE announced that the battery successfully powered its underground mining scoop. It also have powered automobiles and buses before as I could find a few faded news on the web. This made me wonder if Durathon batteries could be a better alternatives and a good reason to eliminate the humdrum noisy generators around telecommunication towers and here is a few words about it.

Especially in Asia, where power is unreliable and so does the cost of fuel, its usual that the fuel from the tower generators are stolen and moreover the maintenance burden increases along with the electric grid’s craziness. Durathon battery could be a better choice as a reliable and versatile uninterrupted power source’s storage unit. As GE explains, the battery itself is made from normal materials and the maintenance and security wouldn’t be an issue, besides its long CDC (Charge-Discharge) life. I believe switching to such a long lasting and reliable battery, a company can not only reduce toxic emissions but also cut down their costs, improve backup systems, spend less on maintenance. This collectively cashes in your vault… Well.. Globally talking! Alright, the science part… Durathon is a (Na-NiCl2)  sodium-metal halide battery and the cathode structure consists of a conductive Ni network, molten salt electrolyte, metal current collector, carbon felt electrolyte reservoir, and the active sodium-metal halide salts and the following media could do a better job with the basic chemistry for the nerdy swipers. About the recent mining breakthrough, the following video shows the scoop in action loaded with the Durathon battery in front.    “The scoop performed well and we are eager to see the final product,” said Carl Estep, maintenance manager at Coal River Energy, LLC. “The lightweight, high density battery’s ability to reduce maintenance and charging time while allowing for easier maneuverability will provide advantages over today’s lead-acid scoops.”And here is a video, Durathon powering a bus a year ago:

It is a quantum leap in battery technology… Imagination at work ;)