Sometimes you do get flabbergasted even when you see a touch table and an allurement builds up to play with its touch screen and play with it. What would be your geeky emotional status when you are pushed inside a room with a polarized 3D glasses, and a 3D video footage of Mars being displayed in about 72 LCDs arranged so that you can get a 320 degrees of panoramic 3D view of it?

The guys at the University of Illinois’ Electronic Visualization Laboratory has already built a Immersive virtual environment that treated the eyes pretty cool, years ago under the name CAVE. A year ago, the CAVE was upgraded with 72 3D – 46 inch – LCD panels, which displays segments of the realtime media processed from 36 noded high performance computer clusters. The 3D visuals are made livelier by the 20 speaker fitted in the 8 feet wall of 24 feet diameter environment. There are 10 tracking systems that maps the users movements and the controls constantly to provide a continuous display and the resolution of the 3D display is 37 Megapixels and that of the 2D display is 74 Megapixels which is scalable along with the controls.

The 36 high performance computers are powered by 2.9 gigahertz – 16-core Intel Xeon processors and the graphics are powered by NVIDIA GeForce GTX 680 graphics cards. One computer per two screens are used forming the 36 noded computer cluster of 36-nodes.

The interesting stuff is the way the perspective of the image changes as the person with the 3D glass turns his head. This is done by a circular array of ­infrared cameras,that detect the location sensors on 3D glasses to calculate the images and view it in the right perspective.

The applications of this CAVE 2 will be a game changer in a lot of fields. This can literally be used as a virtual microscope, telescope to explore both the micro and macro world respectively. Project visualization would be more comfy with a wide area to juxtapose stuffs. This tech is one great outcome for a real deal of virtual immersion. 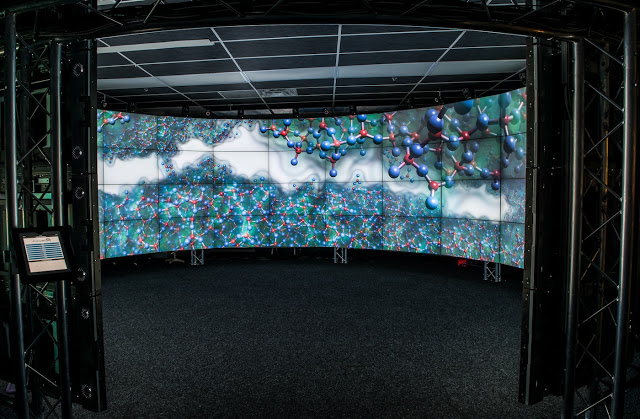 I personally would like to explore the universe in 3D. The Electronic Visualization Laboratory is already listed on my destination list and would pay a visit there soon for a live experience.

The following video is a brief documentary about the project by the EVL: