by Karthikeyan KC — updated on November 27, 2017 · in Aerospace · Electronics 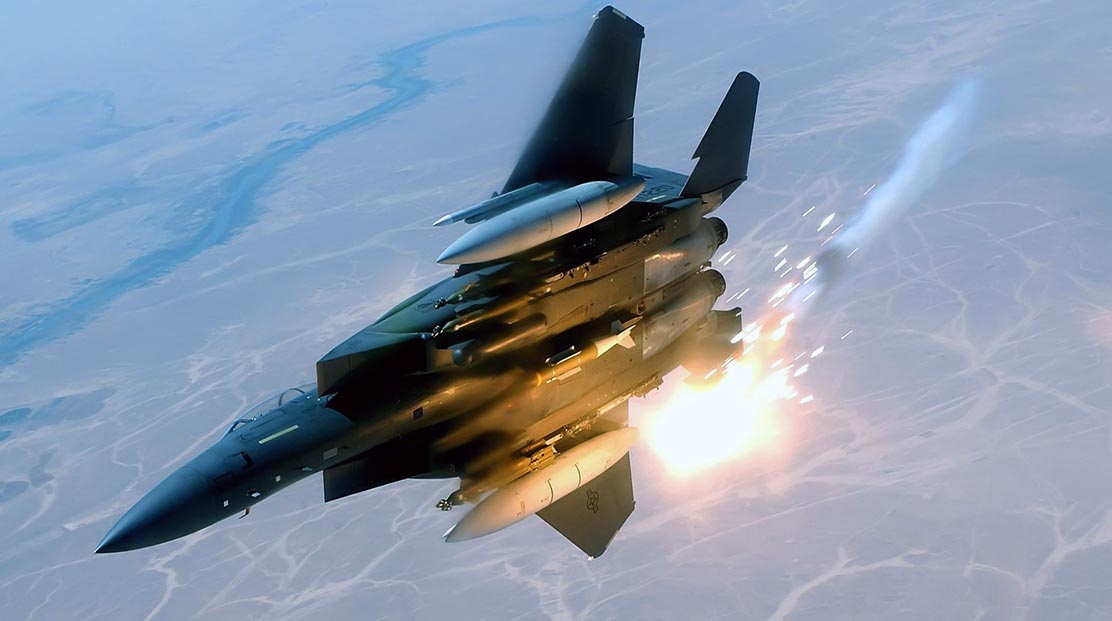 If you have ever played H.A.W.X or any military FPS games like Call of Duty or Battlefield, you might wonder how those fighter airplanes lock-on to their targets and track them continuously. If you haven’t played such games, you might have witnessed such ‘lock-on moments’ in any military action movies like Behind the Enemy Lines, Stealth and in some television shows.

The scenario is more or less the same. The pilot finds a bandit, brings his target designator on his radar screen, locks on to the enemy – who is shown as a blip – and then he fires the missile. KABOOM! Though the whole process looks much easier, the underlying principle for the target lock-on is quite sophisticated.

Missile lock-on is the process of acquiring a target and tracking it continuously to guide a missile to take it down. Before the missile launch, it has to know who its target is. So target lock-on is the very first step in targeting an enemy, followed by tracking him. Locking on to a target is no easy job, especially when he needs to maintain that lock-on phase by tracking the flying target to guide a missile.

Lock-on involves two steps. First, the pilot has to identify the enemy aircraft. The onboard radar is switched to scan mode and is used to scan the entire airspace in front of him for any targets. The search information will be displayed on his MFDMulti-Function DisplayA multi-function display (MFD) is a small screen (CRT or LCD) in an aircraft surrounded by multiple buttons that can be used to display information to the pilot in numerous configurable ways. in the FCR Scope. 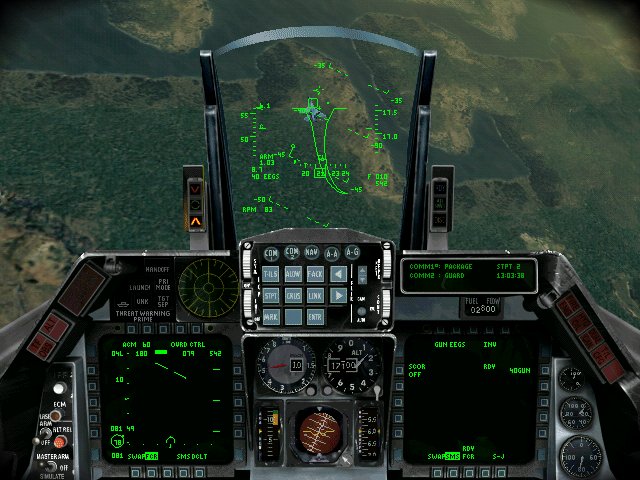 He could then switch the radar from scan mode to tracking mode once he designates the target and locks-on to it. These radars are known as the Fire-Control Radar, which assists the Fire-Control System in locking and tracking the target. The FCR emits a narrow radio beam towards the aircraft (or multiple targets as the advanced FCRs have the capability to Track While Scan and lock multiple targets). The lock-on is notified to the pilot through a constant and a distinctive trill sound. Now, the pilot is free to launch and guide missiles.

There are basically three ways a missile can be guided. The common method employed in this generation fighter planes and attack helicopters is the Semi-Active Radar Homing– SARH. The second type is a sophisticated missile guidance method that has its own guidance systems – Active Radar Homing. The third type are the missiles that work on their own, sensing physical data – Passive Radar Homing Missiles. 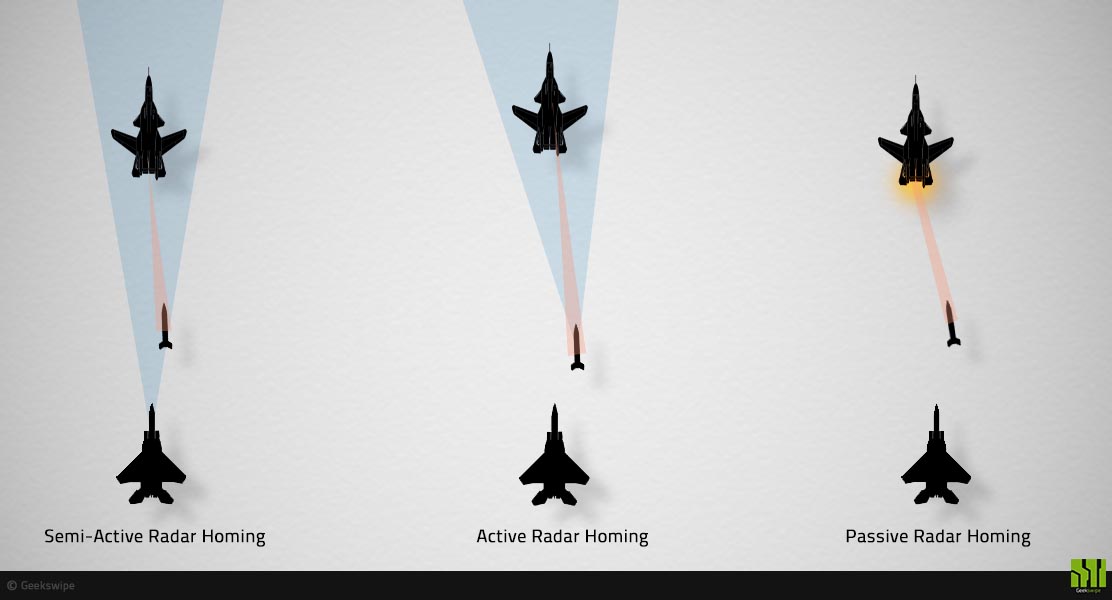 SARH is the most widely used homing system in fighter airplanes and ground vehicles. As they use the airplane’s radar as the transmission source, they are lighter in weight compared to the ones that have an active radar in them. Besides, the onboard radar on the airplane provides a better resolution of the target and provides a better guidance for the missile. This method requires a successful lock-on and continuous tracking of the target to be destroyed.

This method employs all the guidance electronics necessary, inside the missile itself. This includes the radar that acts as an active one that illuminates the target and also the one that detects the reflected beam back to track the target. This doesn’t involve the FCR of the airplane and is considered to be the best choice if the command doesn’t want to risk their airplane, as the target airplane’s radar might actually detect the lock-on in the case of SARH. The RWR systems that is later discussed in this article handles this job.

In some extreme combat scenarios, the active radar missiles are fired without a lock-on. In that case, the missiles would use their radar to randomly lock on to the nearest target and destroy it (Even if that aircraft is a friendly!).

This is the simplest method of all and is way easier to fire. Indeed, these missiles are termed as fire and forget for the same reason. These missiles usually don’t have to be locked-on to a target as they rely on physical information like an IR image or a heat source to guide itself. They are also called as ‘heat seekers.’ In this case, the airplane locks on to the target as an additional guidance if needed. When the pilot fires the missile, the IR sensor senses the rapid contrast changes in the IR image of the object and the systems plans its own trajectory according to its position. The heat seekers works similar but by sensing the heat from the engines and the leading edge of the wings.

Usually, fighter airplanes scan only the area in front of them. So to detect any ‘lock-on’ – a radio beam being focused at them – from other directions requires a warning system known as RWR (Radar Warning Receiver). They listen to any radar signals and if any found, they warn the pilot with a trill sound and a visual, so that the pilot can evade the ‘lock-on’. The visual can be found at the pilot’s radar scope. It shows the threat in a box or a diamond with legends representing the type of the aircraft. It also shows the pilot, the speed and heading of the threat. Most of the RWR in fighter jets are able to identify the type of airplane or threat from the information gathered from the radio beam. The Radar’s frequency, the mode of transmission, and the speed of the detected object can give away a lot of information for the RWR to determine it. Sometimes RWR also triggers the countermeasures if the threat is imminent. The other version of such warning system is LWR – Laser Warning System. This detects any laser designation on the aircraft and operates by the same principle.

The next time you hop into a fighter jet – okay! A fighter jet in Battlefield 3 or 4 – listen to that trill sound keenly and use your flares only when the missile is launched. Now that you know how these systems work, you might want to take your jet out for a dog-fight and experience the thrill – in a simulator – OF COURSE!