by Karthikeyan KC — updated on September 6, 2016 · in Electronics 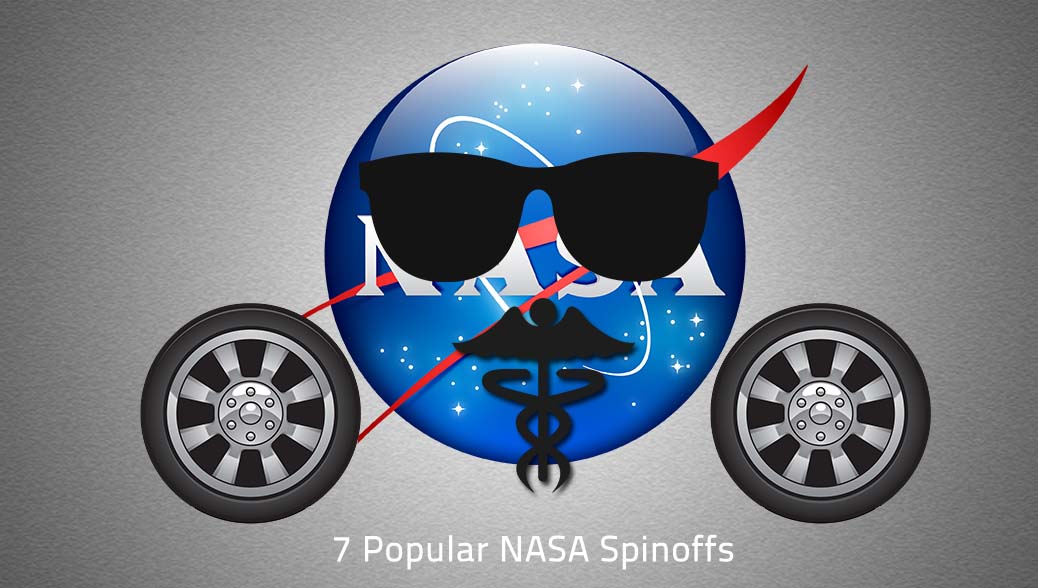 There is more NASA in your life than you think. From fire fighting gears to food safety protocols, NASA has innovated countless technologies. Here is a list of 7 popular techs that you haven’t heard of.

Photobiomodulation Therapy (PBMT) is a technique capable of stimulating or inhibiting cellular function when exposed to high intensity, wavelength specific photon energy. They modulate the structures within a cell to perform functions such as increasing respiratory metabolism, reducing natural inflammatory response and accelerating recovery of injury at cellular level.

PDT (Photodynamic Therapy) treatment uses LED light source in surgical environment as a photon source, which in cancer treatment involves a high intensity monochromatic light to turn on the cancer killing properties of a drug, allowing the drug to be activated in tumor only.

Inclement weather conditions results in uncontrolled skidding causing tire hydroplaning (in aircrafts). In order to reduce the rolling or sliding of tires that occurred during rainstorms, researchers at Langley research center, developed a successful method of creating thin grooves across concrete highways. This created channels through which excess water is forced reducing the risk of tire hydroplaning.

This method is widely applied in potentially hazardous surfaces such as pedestrian walkways, ramps, steps and playgrounds. According to research, safety grooving has reduced highway accidents during wet climate, by approximately 85% , which is by the way, a good number.

Plastics replaced ground and polished glass in eyeglass industry, because of its better absorption of UV radiation and lower manufacturing costs, which was also shatter resistant and highly susceptible to scratching. Dr. Ted Wydeven of Ames Research center used electric discharge of an organic vapor to coat a filter with thin plastic film. This research (originally started off for spacecraft water purification system) continued as NASA developed an abrasion resistant coating for astronaut space helmet visors and other plastic surfaces of aerospace equipment. In 1983, Foster Grant obtained a license from NASA for the scratch resistant coating technology.

VAS is a simple, effective, affordable analysis tool for video enhancement and analysis. It supports full resolution digital video, frame by frame analysis and the ability to store analog video in digital format. Pretty cool, right? Maximum of 12 hours of digital video can be stored and maintained for reliable footage analysis. Widely used in surveillance and crime scene footage, VAS was overhauled by VISAR (Video image stabilization and Registration) technology which is capable of enhancing night-time video tapes made from hand-held camcorders.

This is basically a free app, designed for ipad, which serves as a news outlet for NASA’s space based earth science research.  The application ranges from satellite images, thermal images and CGI reconstructions that enable the users to study about climate change, earth’s dynamic systems etc., A similar software is also available for PC and can be found here.

This system apparently transforms waste water into pure water for  usage that helps astronauts in space stations sustain during future space missions. Without this, the International Space Station’s current logistics resupply capacity would not be able to support the standard population of six crew members. NASA’s research and application has provided the Microbial Check Valve (MCV), which is an integral component of purification and filtration process.

Well, the NASA spinoff list will append every year, beyond a typical number of tweets in your twitter feed, and I guess NASA deserves something better than a single nod of gratitude from us. Warp here and here to read more about NASA spinoff techs.