What makes a game so special to talk about it all day and how real it seemed? Its the very minute detail you see in the gameplay including the destruction, fractures, fluid and the textures that make up the game environment. So far the game world have encountered a lot of changes as you could keep scrolling the timeline of the graphics evolution. The following explains an entirely new fluid simulation algorithm that adds a real time fluid effect as the one shown below.

Position Based Fluids is a method that utilizes the iterative algorithm of the Position Based Dynamics (PBD) framework to simulate fluids. PBD is the framework used in the PhysX SDK (NVIDIA) to simulate deformable objects and clothes. The simulation is so realistic as the physics seems exactly the same as in the real world, though its visually rendered over the simulation of particle interactions at the points. 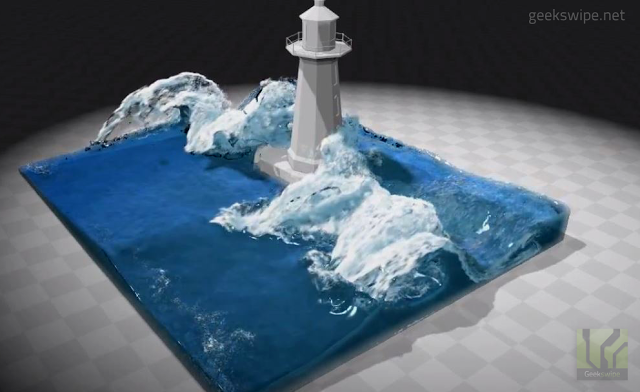 The following is the demo video that shows the realism of the Position Based Fluids and the paper is going to be presented at SIGGRAPH 2013 by Miles Macklin and Matthias Mueller-Fischer.

The Position Based Fluids is combined here with the real time dynamic fracture simulation technology to show the effects of destruction with enhanced realism.

The Real Time Dynamic Fracture Simulation technology is so impressive as it uses less computational power to produce real time destructions and fractures with previously fractured parts during the runtime of a game. This simply means that any complex objects in the game can be broken into any number of pieces with less computational power with more realism in physics. Its better understood with a video demonstrating the technology here.

Games, thats what its all about! The more it gets real, the more we are into the world. My favorite choice for a staggering graphics is the Frostbite 2 engine powered Battlefield 3. Now with the increased hope on the next installment Battlefield 4, which also features the new Frostbite 3 engine, this recent attraction talks about the Position Based Fluid simulation and The Real Time Dynamic Fracture simulation based on the Position Based Dynamics of the PhysX SDK from NVIDIA shows great expectations towards the future of gaming.

My forecast as a futurist is that as the computational power increases exponentially with complex algorithms in simulating particles we could achieve a microscopic level of perfection in simulating the real world objects in real time with more enhanced physics simulation algorithm and hardware PPU. Or… We could play a Hardcore realistic game combined with technologies like CAGE 2 and augmented realities, in a decade.