My Room, My Rules

Microsoft turns into an augmented reality master when it comes to research and gaming. I’m now thrilled and expecting the next Xbox, yet to be revealed at the E3 event. The Microsoft Research attracted me with their teaser about the IllumiRoom project at CES 2013, which made me to write this :)

Every gamer’s life is stuffed in his tiny room with his lovely Xbox console and his kinect looking him and tempting him to play more, which is an obvious nightmare for the parents. Kinect was one good device that increased the gaming time of any kids with Xbox and a lot geeks to use it in more intelligent ways, then followed the 3D glasses to invade more time from real-life to play games. Now, it seems that Xbox is ready to buy the whole day of the gaming time of the gamers by transforming the entire room into a gaming arena and providing a better, livelier gaming environment. 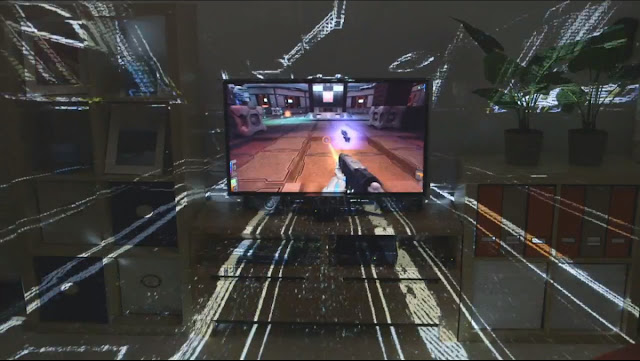 Its been only a few months since Microsoft patented the concept and now, its real. The device works with the help of the Kinect device to scan your room and with the help of the mapped co-ordinates the projector projects the images of the game outside the TV and beyond it to create a real-time gaming environment. The lines are blurred enough to make it as real as it could get and the special effects are too good to be amazed. The special effects includes the bullet vibrations in the projected image besides all the particles are clearly projected without any help of processing requirements, with an intelligent object adaption technology. This could be th eultimate gaming gift for any gamers in this season.

Its time to bid adieu to the old friend, Xbox 360 and welcome home its new breed of console soon with Microsoft IllumniRoom.