On Google Glass and How It Will Fail

Is it a cool augmented reality gadget, a toy, or a privacy-invading failure? Google Glass is yet another controversial product from the search engine company, Google, that focuses on strapping a wearable glass with a camera onto your face. You can record your life, the private moments of your fellow humans, and other ridiculous things and instantly stream it to Google+ (yet another product that is destined to fail).

You might have watched Google’s pretty pretty promotional video for this product, but here is a darker insight on how Google Glass is a privacy threat and how it is destined to fail.

Google Glass has no recording indicator

Most smartphones these days, especially Nokia devices, have an LED indicator along with an audible blip when you hit the record button. The intent of such a provision is to primarily ensure the privacy of the humans in the vicinity by letting them know that they are being recorded.

Update: I wrote this article way back when phones had a default recording indicator. Smartphones these days have nothing of that sort and they can initiate a silent video recording.

But glasses don’t have any sort of audible notification or any recording indicator. And they are going to be voice-controlled. Also, it’s a device that is actively facing ever person the wearer looks at. And as soon as the wearer initiates the voice command ‘Ok Glass’ (a similar command to ‘Ok Google‘), the device would stealthily take pictures or record/stream video. In other words, there is absolutely no way you could tell if the Google Glass camera is active.

The idea of having a recorder strapped around your head alone is controversial to look at. If the said device is from a data-gathering company like Google, I guess it is self-explanatory. In fact, many businesses have already banned Google glasses on their premises and have put out the following sign. 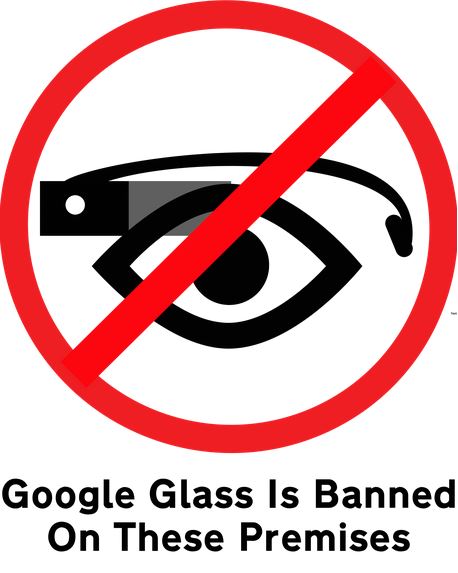 Would an opensource wearable glass gadget make a difference?

Of course. If a google glass-like device were to be made with a tamper-proof recording indicator, audible alerts, and with its codebase in an open repository, then I guess such a device is a boon to the population. Even then it would mostly be seen as a gimmick than a regular gadget due to its unconventional form factor that makes you look stupid.

Maybe! Maybe Google Glass could find a better place in adventure sports or domestic sports where you’d have an alternative to helmet-mounted action cameras. In places where privacy is not a concern, for example, industrial zones where you’d need a constant supply of data for reference. There are more niche applications, but it is beyond the scope of this article. With too few use cases like these, google glass (or any ‘smart’ glass) will fail as a mainstream consumer gadget.