How NASA Calculates the Distance, Velocity and Position of the Voyager Spacecrafts 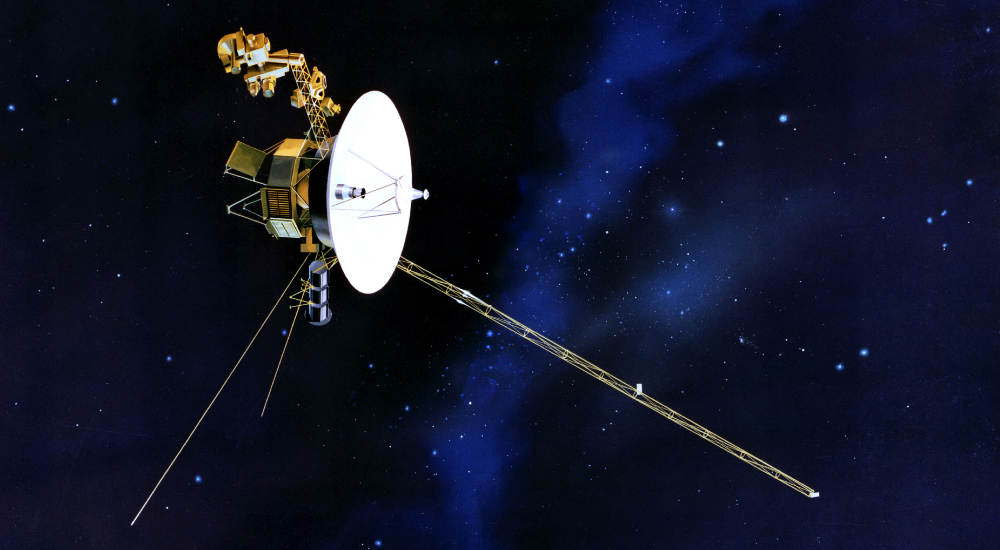 The twin space probes Voyager 1 and Voyager 2 are soaring towards the interstellar space, searching the answers for all the profound questions about our existence. While they are exploring the deep dark space, have you ever wondered how NASA still keeps them in the right path or how do they navigate them from Earth through vast distances beyond the Neptunian orbit?

If you know the basic stuffs about the orbital mechanics, you will know that the two Voyagers are actually in a hyperbolic orbit with the sun, which means they are on an escape trajectory. So in order to make definitive calculations for a space probe like Voyager 1 and Voyager 2, the parameters need to be heliocentric. NASA does this by determining the parameters relative to earth and then uses it to determine the final parameters relative to our star.

NASA uses their three Deep Space Network stations across the globe to communicate with the Voyagers. Let’s take Voyager 1 to learn how NASA communicates with it and determines the position, velocity and distance.

Voyager 1’s communication system has a high gain parabolic dish of 3.7 meters in diameter to communicate with Earth. They use S-band for uplink and X-band for downlink. So to determine the distance of the spacecraft from Earth, they add a ranging pulse to the uplink and they transmit it to the spacecraft. When the Voyager receives this pulse, it sends it back to Earth. The time taken for the whole transmission and reception is recorded. As the electrical systems and computers take some time to process the signal in the Voyager, proper corrections are done to the recorded time by comparing it with the pre-launch data at NASA. Currently, it takes approximately 18 hours for a transmission from Earth to reach Voyager 1. So when one does the distance calculation with the recorded time and the known speed of the transmission (speed of light), one could easily know the distance. As of June 10, 2015, 10:17 UTC the distance between Voyager 1 and Earth was 130.81103152 AU. When added one AU (approximate distance between Earth and Sun) to it, we would get the distance between Voyager 1 and the Sun, which was 131.64053152 AU at that time.

With the above distance data, we can measure the average velocity of the Voyager with another set of distance and signal time data taken at a different instance. But to measure the velocity more accurately, they use Doppler Effect (like the Police RADAR gun). NASA uses the DSN to send an uplink signal with a locked frequency and calculate the Doppler shift in the return frequency, which is downlinked by the Voyager. To eliminate any interference with the uplink, a constant might be multiplied to the downlink frequency.

Position in the sky

As the two spacecrafts are in hyperbolic orbits, escaping from the sun, the Voyagers are actually not travelling in a straight line (almost straight line though) towards the interstellar space. Also the Earth itself is moving in its orbit. So like any celestial object, we need to determine the position of the two Voyagers. The position is represented in celestial coordinates. Though Voyager’s Right Ascension and Declination (Celestial Longitude and Latitude) could be determined by using the Deep Space Network dish angles from different stations and tracked by timed Doppler shift measurements, NASA uses sophisticated combinations of methods like Very Long Baseline interferometry, precision ranging and Differenced Doppler to calculate them with better accuracy.

So by combining the data from time to time, NASA is able to determine the distance, velocity and the position of the soaring Voyagers.

I thought of embedding the JPL’s live update script here, but it appears that they are updating it periodically with the offline calculations as well. If you are interested, the script can be found here.