How Does a Sonic Boom Work? 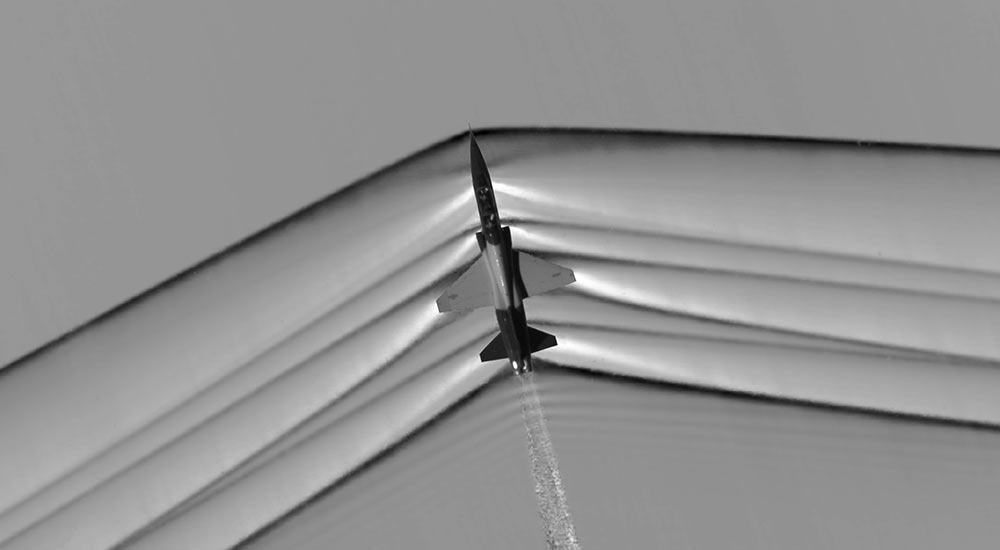 A sonic boom is a sound you hear when something (duh! airplane!) travels at a velocity faster than the velocity of sound (340 m/s). They are exactly heard when the airplane breaks the barrier of the sound and starts traveling at supersonic speed, forming shock waves. To understand how a sonic boom works, let’s roll back a little and explore how sound works.

Sound waves are nothing but the collision of particles in air at a certain frequency generated by the source. When an airplane at a speed below the speed of sound travels, you can hear it just as normal as a police vehicle on the road. As the vehicle approaches you, the sound is more amplified and it fades away as it moves far from you. This is due to the Doppler shift in the sound waves. However, these all happens at a speed much slower than the sound and there is no way the sound waves can overlap each other at any given time. Visually, this is how we can picture the sound waves of an airplane at subsonic speeds. 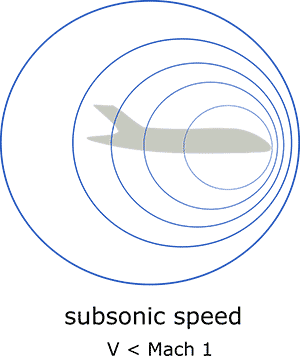 Transonic speed is the range where the shockwaves, and eventually the sonic boom, begins to occur. At this speeds, the moving object is accelerating from a speed slower than sound to a speed higher than the speed of sound. Now let’s quickly visualize those sound waves and check what is going on here. 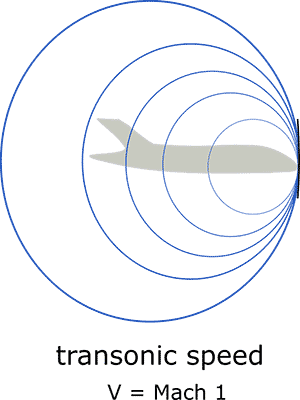 The airplane and the sound travel more or less at the same speeds. At this point, the waves begin to merge each other and form a shock wave, creating a high-pressure difference between the nose region and the fuselage region of the plane behind it. This staggering pressure difference is what causes the sonic boom.

When the plane breaks the speed of sound and travels much faster than the sound itself, this is how the sound waves will approximately look. 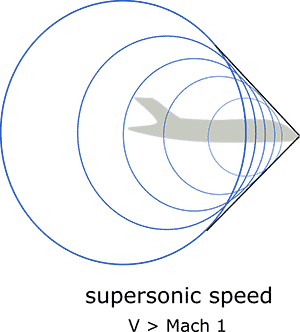 The sound waves are now produced faster than the normal speed of sound itself, and hence, they form overlapping wavefronts, forming a similar cone shape as shown in the figure. This is called a Mach cone. The shockwaves would now be intense as the pressure difference is higher.

When sound waves are compressed at these speeds, there is an immense change in the property of air around the airplane. As the pressure drops abruptly, it lowers the temperature of the air, leading to a rapid condensation. This forms clouds with water vapor around the airplane.

When an airplane traveling at supersonic speed passes you, you could be able to see this vapor cones visually (vapor cones are not exclusive to supersonic speeds. They could be seen at subsonic speeds too). And depending on the mach cone angle, you will then hear the sonic boom a few seconds later, as a rumbling thunder or an explosion.

Contrary to the popular belief, a sonic boom is not something that happens at a certain moment. As long as an airplane is in a supersonic flight, the sonic boom continues throughout its path. The mach cone keeps extending to the ground like a hyperbolic red carpet, technically called as a boom carpet.

Another interesting fact is that there are actually two booms occurring in a supersonic airplane. One at the nose and the other at the tail. More like an entry and exit boom. So there is actually two pressure changes happening in an airplane. At the nose, the pressure would be so high and it abruptly drops (boom) towards a negative pressure at the tail, and then suddenly returns to the normal atmospheric pressure (boom). If an engineer like me would profile the pressure variation of these shock waves, it would form an N-shaped profile, thereby forming N-wave. A static human being on the ground will only hear this double boom as a single explosion due to the facts that he is stationary and the airplane traverses his location so quickly.

However, if you could put up your ironman suit and fly at supersonic speeds behind a fighter jet (a little above the nozzle), you can understand it practically, with one heck of a continuous boom rupturing your ear. On the other hand, the pilots would be enjoying their playlist in a peaceful silent ambiance, as they are already traveling faster than the shock wave.

Fun fact! You can create a sonic boom with a bullwhip. Try it out.