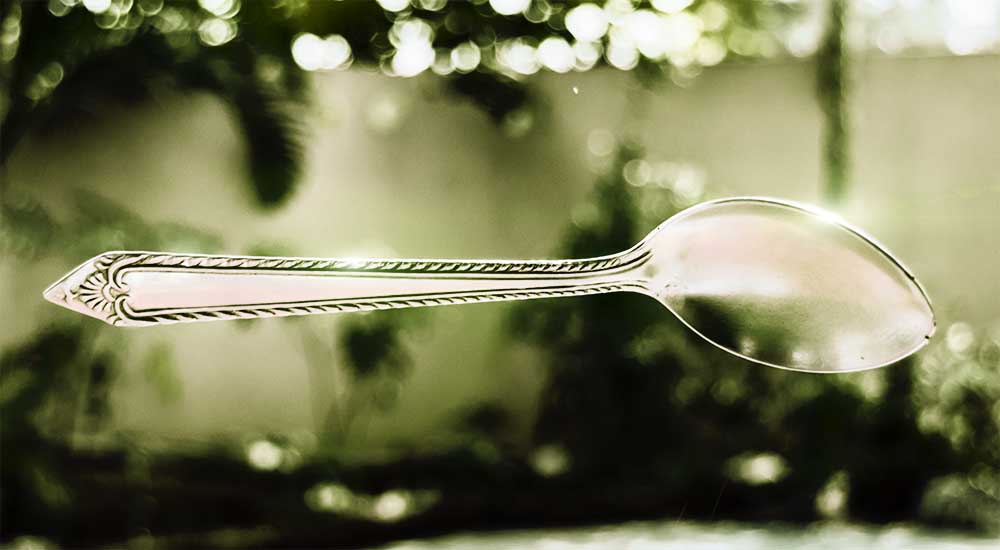 Yes there IS a spoon that bends. It is made up of Nickel Titanium Alloy, which is a shape memory alloy. Image – © Geekswipe. All Rights Reserved.

What if someone—let’s assume it as the Hulk—accidentally stepped on your toy and it pathetically deformed into a weird shape? Have you ever wondered how awesome would it be, if they just sprung back to the way they were, before they were bent, like it had its own memory to return to that original shape? Turns out, there are materials, which on heating can go back to their original shape, altering their deformed crystal structure back to the way they were ‘programmed’ to remember. This do not apply to all the materials because if it was a rubber, the object would return back to its original form, say parent shape, the moment you take the force away (the force which you applied to deform). Or if it was plastic or a glass, they lose their shape and break, or worse, they remain in the disfigured state permanently.

Though few metals are strong enough to bend and subject to changes without breaking, they deform permanently or even melt at a certain temperature. As heat is a property that changes and determines the shape of a metal, there are alloys that use this property at certain temperatures to remember their shapes (crystal structure). When they are deformed and heated, they are capable of retracing their parental crystal structure. This is solid phase transforming effect in a material is called as shape memory. There are different materials, from alloys to polymers that possess this property in them. One such shape memory alloy is the Nitinol (Nickel Titanium-Naval Ordnance Laboratory), an alloy of Nickel and Titanium, used in ‘bending spoons’,

Further, to understand how a shape memory works, let’s take Nitinol as an example. 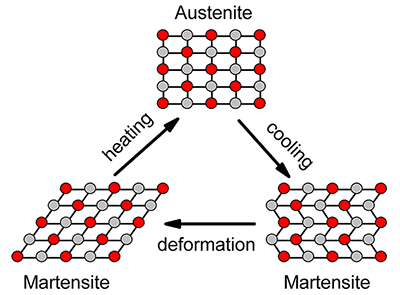 On heating at a temperature of about 500 °C, the atoms arrange themselves into the most compact and regular pattern possible resulting in a rigid cubic arrangement (austenite phase). At this phase, we can anneal it to any shape we’d like it to ‘remember’ for us. Once quenched, the shape will retain even when the Nitinol transforms to its martensite phase. Now we can bend, deform the poor thing into any shape we need. The transition temperature varies from 50-166 °C, above which Nitinol reverts from martensite to austenite phase, which changes it back to its parent shape. So to bring back the shape, all we had to do is to heat the deformed Nitinol to the austenite temperature, where it ‘remembers’ the shape.

Besides heating, the materials can also remember the shape when forces are externally applied to it (Pseudoelasticity). Also, materials can be ‘trained’ to remember more than just one shape, one in austenite phase and other in martensite phase (Two-way shape memory). Besides Nitinol, there are many more alloys that reproduce the same effect- Cu-Zn-Al (Alloys made of copper, zinc and aluminum), Cu-Al-Ni (alloys made of copper, aluminum and nickel), Fe-Mn-Si (alloys made from iron, manganese and silicon).

The shape memory property has its uses in the fields of aerospace, medicine, and various other industrial machineries. These alloys in the form of plates can be practically used in between the ends of broken bones. The very nature of these metals whose memory transfer temperature is close to that of human body is helpful because it aids in the deformation and the retention of parent shape. Therefore, it exerts a compression force on the broken bone at the point of fracture. Considering this level of elasticity, they are also used in hip replacements, for these plates continue exerting the compressive force even after the bones are healed.

Besides mending broken bones, they are also used for braces and dental arch wires, in reinforcement for clogged arteries and veins. The most popular application can be seen in the commercial eyeglass frames where they can be bent and yet they retain their shape.

One practical application of the shape memory effect could be seen in the Hubble Space Telescope, where it has a shape memory alloy arm to release its solar panel automatically once it had reached space. Prior to launch, the solar panel was folded inward with the arms at martensite phase and once it reached it was released into the orbit, the sun heated up the arms and it automatically retracted the solar panels, as ‘programmed’. This principle is also applied in lengthy huge tubes carrying gas and hazardous liquids and even in the rovers on Mars.

But these alloys are pretty expensive for manufacturing and so the scientists have started developing them out of inexpensive materials such as plastics possessing shape memory effect. These are the so-called Shape Memory Polymers (SMP). The spoon boy from “The Matrix” might as well take his word back about bending spoons, for the SMPs might just bring on interesting and useful applications than just that.