How Are Neutrinos Formed and Detected? 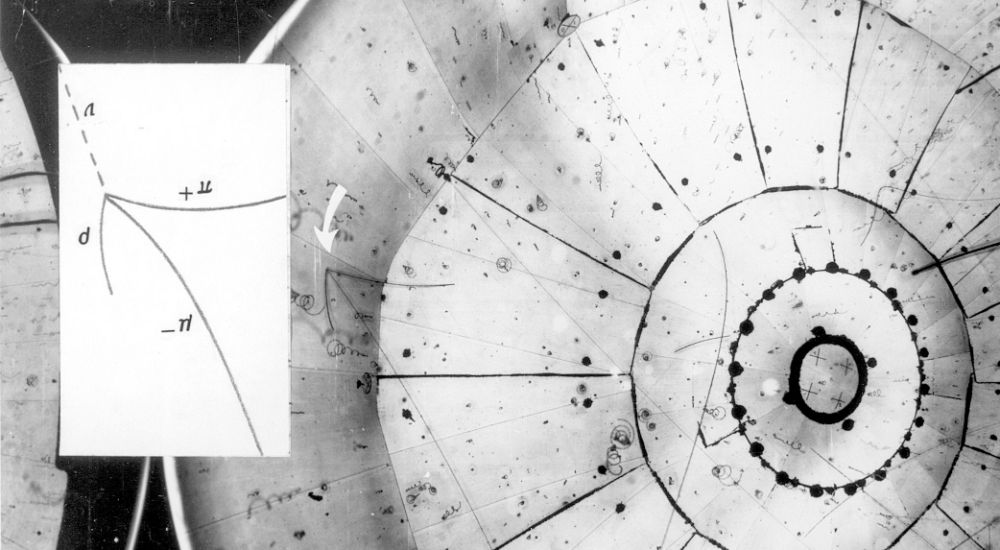 Neutrino Event – The first photograph of a neutrino interacting with a proton in a hydrogen bubble chamber to create muon and pi meson.

Neutrinos hold a special spotlight in the world of particle physics for being the most elusive particle. And as you read this, there are neutrinos, billions of it, passing through you. Some would have been formed in the sun, and some from a supernova far away, and some even from the earth’s core. What makes neutrinos elusive is that they do not interact with you or any physical matter as they permeate.

In this revised and updated Geekswipe edition on neutrinos, we will learn the fundamental nature of neutrinos, explore how they are formed, and find out how we can detect them.

Neutrinos, in a nutshell, are very tiny particles, a fundamental one, with no charge or mass (almost zero), traversing the universe at speeds closer to the speed of light. Being a neutral and massless particle, the neutrinos do not interact electromagnetically, gravitationally, or even with the strong interaction. And this is why it is hard to detect them, unlike other particles that would electrically interact with matters, say, a sensor.

However, neutrinos do interact through the weak interaction—one of the four fundamental interactions that are responsible for the decay of subatomic particles⁠—and with extreme gravity. And as a matter of fact, historically, beta decay is how the idea of neutrino was hypothesised.

How were neutrinos discovered?

Before the discovery of neutrinos, the basic understanding of beta decay was that a neutron would decay into a proton, emitting an electron.

But, Pauli Wolfgang, upon studying the beta decay of carbon to nitrogen, found that the angular momentum before and after the decay wasn’t conserved. So Pauli postulated that the logical explanation is that an extra particle was released along with the electron.

And it was observed that the energy was not conserved as well, and it was apparent that there was indeed another particle emitted—a small neutral particle, a neutrino. Then in the late 1950s, the Cowan–Reines neutrino experiment finally proved neutrino’s existence by observing the interaction of antineutrinos from a nuclear reactor with the protons.

A neutrino can be formed by any weak interaction that occurs in the universe.

Neutrinos, like electrons, are leptons. When a neutrino is emitted from a weak reaction, it is identified based on the particle that decays, which would be any of the three known lepton flavours (electron, muon, tau). For example, if an electron is released in beta plus decay, the emitted neutrino would be an electron neutrino. But some particle decays create other flavours as well.

Tau, the heaviest lepton, is unstable as well. But unlike Muon, Tau decays into a pi meson (a hadron) and a tau neutrino.

How are neutrinos detected?

As the neutrinos do not interact electromagnetically or gravitationally (within practical limits), it is impossible for any physical detectors to pick it up, as they’d just pass through it unfazed. But what can be observed are the effects of its interaction with the weak force.

If a neutrino interacts with the nucleus of an atom by the weak interaction it creates an observable effect that can be recorded. For example, when a high energy neutrino (e.g. solar neutrino) hits a neutron of an atom, it interacts and decays to proton and an electron.

And if this happens inside a heavy water medium or ice, the high energy electrons emitted would, in turn, radiate photons (spontaneous emission) stacked up like how air molecules stack up on a supersonic aircraft (sonic boom) and create an optical boom called the Cherenkov radiation. Thus by detecting this radiation, the interaction of neutrinos can be detected.

Cherenkov detectors are the most common type, and to avoid cosmic rays and background radiation interfering, they are usually built underground. Super-Kamiokande is one such neutrino detector.