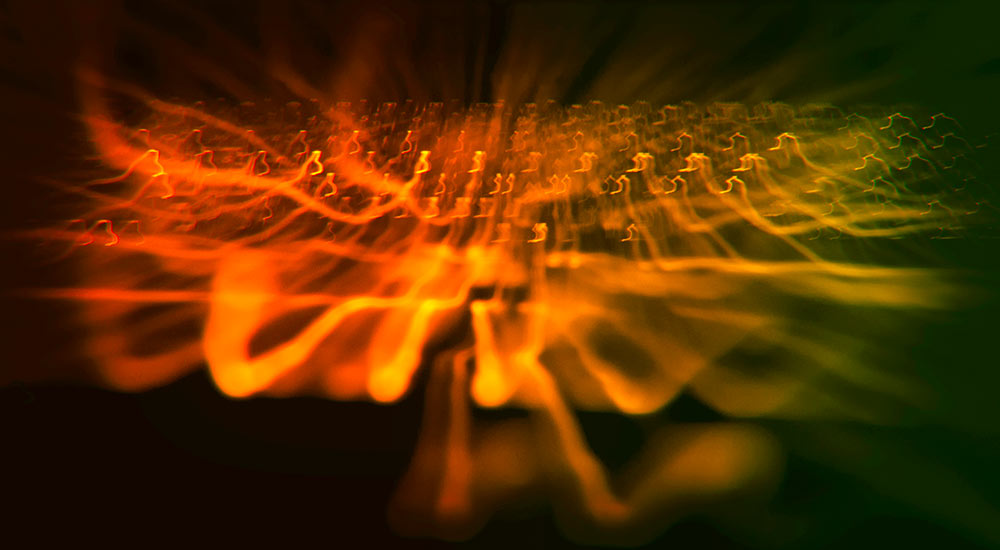 Holograms are one of the counter-intuitive concepts in physics to explain. In this edition, we shall explore what holograms are, the process behind capturing those spectacular parallax images and understand the underlying simplicity of holography.

Holograms in a nut-shell

To put it in simpler words, a hologram is a photograph of an object from the perspective of human eyes. In other words, it is a photograph of an object that not only contains the two-dimensional information (intensity) of the reflected light from it like regular photographs, but also the three-dimensional information (phase) of light reflected from the object at different angles — just like how human eyes would perceive the object. But how is it done?

If you take out your camera and shoot a beautiful picture of a doll, your camera records all the visible light that is reflected from the doll. It goes through the lens, aperture, and then on to the sensor where the intensity of each colour is recorded. The photograph represents the two-dimensional information of how the visible light had reflected from the object. This information is two-dimensional because the camera could record only the intensity of each wavelength component in the visible spectrum that is reflected in its direction.

But in reality, visible light from everyday objects are reflected in all the directions. When you look at the front side of the doll with your eyes, you see the light reflected in that direction only. When you move your head sideways, you see a different light field that is reflected in that direction. This is the result of the three-dimensional structure of the doll. The hologram is simply the recording of this information in the form of interference patterns created with the light field. This is usually done with the help of lasers. The holographic image is simply the reconstruction of the image from the interference patterns. If you still don’t get it, you will understand it once you follow how holograms are made.

How are holograms recorded?

As mentioned above, holographic images are virtual images that are recreated from some information. It is more like recording a music instrument and playing it back later without the actual instrument. So the information required in case of the holographic image is the three-dimensional structure of the doll and how the light gets reflected off the surface of it so that we can recreate the image later. That’s where the interference pattern comes. Like a sound signal, the interference pattern is the recording of an object’s light field.

Until now, we have been using the term hologram in general, referring both to the intermediate process of recording the interference pattern and to the end result. Let’s clear that up quick. A hologram is the recorded information of the light field, and a holographic image is the recreated image from the hologram. Got it? Cool!

To record a hologram (the interference pattern), we need two light sources (so that they can interfere). Usually, a coherent light source, like a Laser, illuminates the object that needs to be recorded. A part of that beam is split beforehand with the help of a mirror or a beam splitter to make the other beam for interference. So there are two beams. This beam that is used to illuminate the object is called as the object beam. The beam that’s split is known as the reference beam, and it is undisturbed. Here is an illustration to help you keep track of the process. 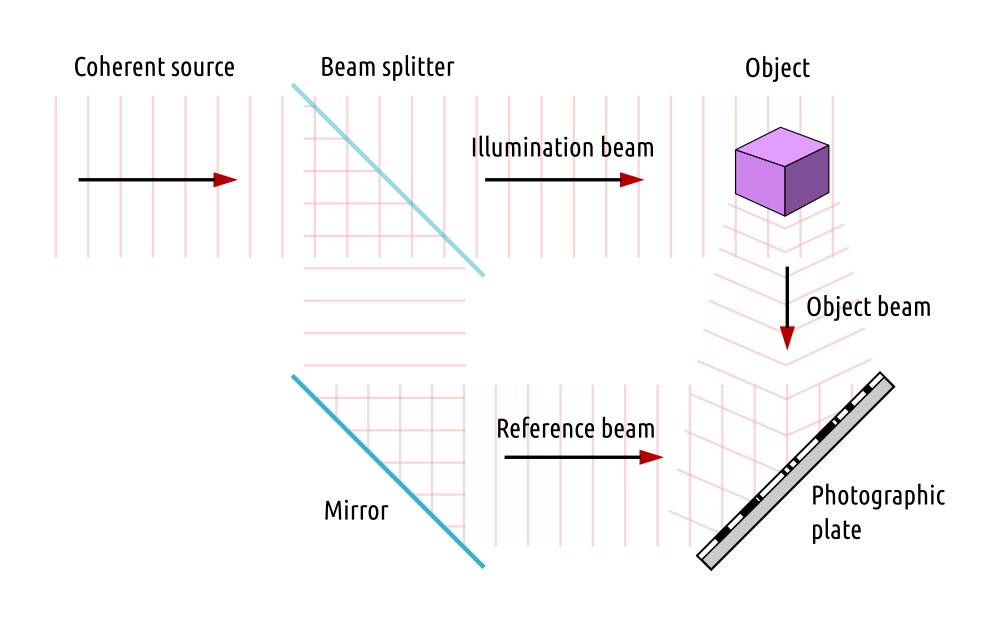 So when the two beams meet, they interfere with each other. The beam that is reflected off the object has different phase compared to the reference beam, thus forming constructive and destructive interference patterns when interfered. When recorded on a photographic plate (made up of silver halide), this forms the hologram — with information of the light field encoded as interference patterns. This is more like freezing the time and recording the light field at that instant so that it can be used later (sort of like recording a music instrument).

Well, the photographic plate with interference pattern now acts as a diffraction grating. So by illuminating the hologram with the same reference beam, the image can be virtually created through the diffraction of light waves through the interference fringes. In simpler words, the diffraction pattern recreates or emulates the original wavefront from the object. The following part will expand on this in detail.

How recreation of the holographic image works?

When a beam of coherent light is diverged (through a lens) onto the hologram from behind at an angle (as shown in the figure below), the light behaves in different ways to produce the end result — the holographic image. As mentioned above, the hologram is nothing but microscopic interference patterns formed by the combination of the reference beam and the object beam at the time of recording. When a light beam similar to the reference beam passes through this tiny little fringes, light behaves as a wave, and it spreads out in all directions due to diffraction. 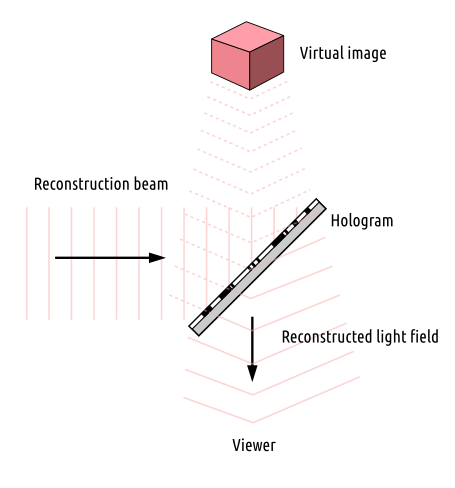 Though most of the light passes through the film, some wavefronts converge and diverge in the viewing end, recreating two images of the original object. The diverging part is where you see the virtual image of the object that was recorded. The image appears in a way that the observer would see it through the holographic plate like a window. Which means, the image seems to be behind the hologram, exactly at the position where the original object was placed while recording.

As the virtual image contains all the optical properties of the original image, it appears three-dimensional to the observer, retaining all the parallax and depth perception. And the converging part creates a real image of the object, which if needed can be photographed. Besides, the interference fringes also reflect light, just the way the original object had reflected the light. So when all these effects come into play, you get the full three-dimensional perception of the object.

A better analogy to understand the holographic image process would be our AM and FM radio transmission, where actual audio signals are modulated with a carrier wave to transmit along long distances. Similarly, what we are doing here in holography is simply registering or recording the wavefronts that are reflected from every point on the object with the help of a reference wave of light, which we later use to decode the original information of how the light had reflected off the original object.

As the entire hologram has all the information encoded in it, every tiny piece of the hologram can be used to recreate the original image with a part of the phase information recorded on it.

For the purpose of this edition, we explored the holography through the process of transmission hologram. There are different types of holograms that use different techniques and light. In the upcoming articles on optics, we shall explore them as well.