How Fast Can a Human Run? 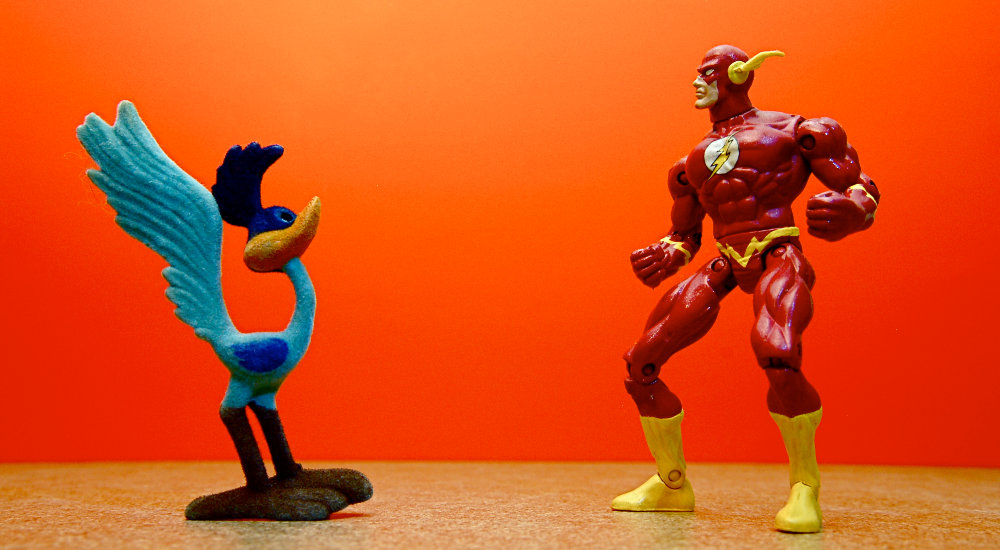 Photo by JD Hancock | CC BY

Among all the biped living organisms on this planet, we humans are always the special kind. Being called as the ‘habitual’ bipeds, we are still one of the slowest bipeds among the primates. Ruling out the other primates, how fast do you think we humans can run with those two legs?

Take a walk around the park. Let’s say it takes ten minutes, in an average. Now you might think that when you decide to run the same distance, you’ll require the same amount of energy. This is a misconception, as our body metabolic rates are quite higher, when we are moving faster. This is because at faster speeds you have to deal with more factors like high muscle forces and air resistance than when you move at slower speeds. This heat up your body and you perspire to expel the heat. Which also means that you consume more oxygen as you run, and would gasp for more air. You’ll spend more energy aerobically and soon you’ll start producing energy anaerobically. Finally, at the expense of energy you’ll cover the distance soon.

Karen Steudel, a zoology professor at Wisconsin and her team members tested both male and female runners, whilst measuring their oxygen intake. As expected, each runner had different levels of fitness and oxygen use but there were ideal speeds for each runner that required the least amount of energy. The optimal speeds were about 13.36kph (about 4.43 min/km) for males and 10.46 km/h (5.64 min/km) for females. The most interesting finding is that at slower speeds, about 7.24 km/h (8 min/km), the metabolic efficiency was at its lowest.

So it is clear that energy plays a key role in determining our speed.

Force is what helps us to run. The speed depends on the force you exert on the ground. Researchers believe that our human body can handle running speeds up to 40miles/hour. Jim Usherwood, a Zoologist of the Royal Veterinary College in London says, “The current best guess as to why we can’t run any faster is it’s something to do with the maximum force that our legs can impose or experience”. Our legs can exert only a little amount of force when they hit the ground. That is, while running, there is only a very little amount of time available to apply enough force to the ground. This is called the foot-ground contact time. It is common that, the foot-ground contact times are less than one-tenth of a second, and major forces are exerted within the one-twentieth of that second of the first instant of foot-ground contact. Also, most of the force is used to keep you from falling down and only a few amount of force is used to propel you forward.

The above two factors could be understood with a simple theory.

In order to run faster, you are applying more force on the ground and push forward to compete the distance. Which in turn makes you to breathe faster, there by transferring your stored energy by doing some work, in this case, running. So it might be clear to you now that you will be spend more energy and exerting more force as you run fast.

The next factor that limits the speed of running is the extent to which our muscle fibers contract. The sprinters were also asked to hop on the treadmill, to find out the total force exerted on a single leg. The results showed that one leg could withstand 30 percent or more of the force while hopping, at top speeds, when compared to the bipedal running at the same speed. Obviously, it makes sense, as the leg has to withstand the whole body weigh besides pushing it forward.

It is clear that the speed of a human being is indeed limited by the capacity of the muscle to exert force.

How fast a human can run?

Though the theoretical limit spans up to 65 km/h, considering the practical factors that limit our speed, the fastest speed a human had ever achieved would be 44.72 km/h. With all the human transcendence ahead of us, we might actually able to beat the theoretical limit and go beyond the 65 km/h mark very soon.