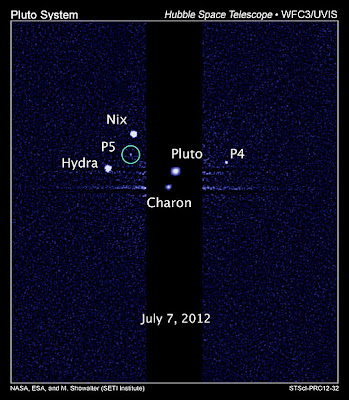 After demoted from its rank of planet to a dwarf planet, Pluto was left alone in the darkness. A team of NASA has been observing the neighborhood of the planet and found a total score of five moons. The newly found fifth moon was named as P5 temporarily unless the team come up with a new name though they already left the fourth moon nameless. Charon, Nix, Hydra, ? , P5.

The moon might have formed with collision of Pluto with objects in Kuiper Belt. The interest in Pluto was significantly increased since the launch of New Horizons, studying the Kuiper Belt as any debris could end up jeopardizing the mission.

Anyways, Pluto got another moon to accompany it out there in the darkness :)