What Would Earth Be Like If It Was a Cube? 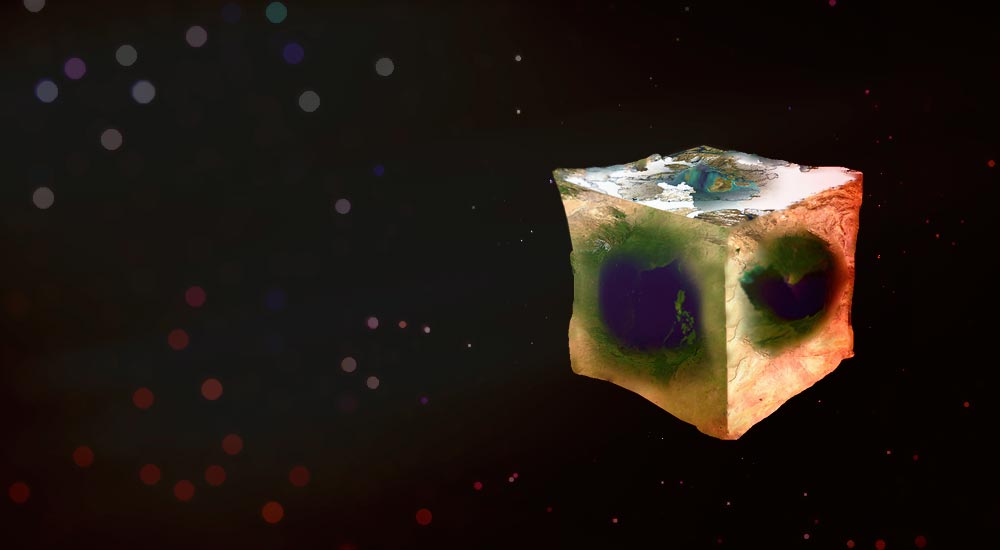 A graphical render of a cube earth.

Last year, I wrote about a cool weekend experiment of Eratosthenes who helped us figure out the radius of the Earth with simple geometry and intuition. Now, it’s time to go a little weird and think about the consequences if our spherical Earth is somehow made into a cube. Why not?

So what now? You are at the center of a planet that’s a mere cube all of a sudden. Whoa! Look around, it’s flat! Hold that thought while I make sure that gravity doesn’t restructure this giant cube back into the old sphere.

The point where you are standing now, the center of the Earth would have the highest gravitational field and it would be pulling you and your hello kitty pants at an angle of ninety degrees. Just a normal day for you. However, if you turn curious and start singing ‘I would walk 500 mi… ahem! 804 kilometers and I would walk 804 kilometers more’ as you walk towards the edge, you and your pants would be fighting against the gravity at a steeper angle. It would exactly feel like walking on an inclined plane, like climbing a mountain. Though the edges of the cube are flat on the horizon, they would seem like the top of the world.

Oh! One more thing. You’d have to pack a space suit along with your lunch.

If the gravity can pull your pink hello kitty pants as you walk towards the edge, it certainly can pull all those water and air towards the center too. So in theory, the cube Earth would have a very big mass of water bulging at the center of the cube. Atmosphere follows the same, forming a cozy and warm biosphere at the center, where life can cherish (probably a water world).

As you are on an expedition to the edge of the world, you’ll lose atmosphere as you keep walking away from the center of the Earth. The edges would be damn cold, desolate and hostile for the normal pinky pants guy or girl and you’d need special space pants, shirts, gloves, boots and helmet to breathe on. In a real sense, you will also need a special space vehicle to reach up to the edge and trade snacks to the humans on the other side. It would be the most incredible thing even to reach closer, without tumbling down with the rest of the rocks under the influence of gravity.

How good is the cube Earth for life?

Quite good! There can only be two major cases upon which the ‘goodness’ can be measured. One, the gravity’s influence on the edges and the weather. Realistically, the gravity would not let the cube be stable. It crushes the mass from the edges and starts grinding them until they succumb to it. This would obviously form volcanoes everywhere with earthquakes.

The weather, however, would seem nice and calm every day. Except, it would be the same throughout the face of the earth as they are now more like the regions near the equator on the spherical counterpart. The faces that are not facing the sun (perpendicular faces to the rotational axis) will behave like poles.

Said that, the point of where physics turns ridiculous is already close. It is impossible for a cube planet to exist. Whatever may be the shape, for a mass as large as Earth, it will always end up as a sphere. Gravity is one good artist!

Here is a quick thought experiment for you. What would happen to water, if you boil it at the edges of the cube Earth? Think about it for a while. If you don’t get it, try reading this.