How to Destroy the Earth? 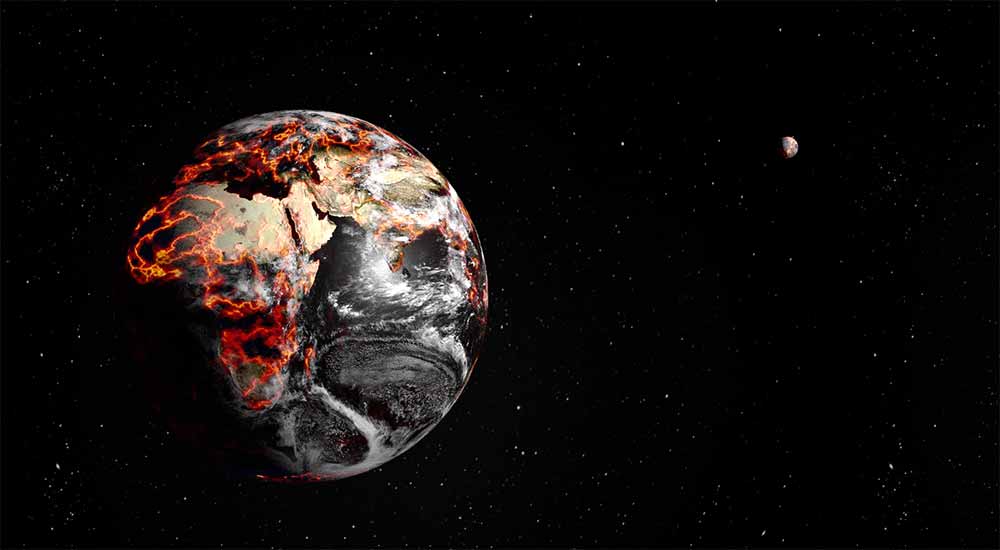 We all would have come to a point of boredom sometime in our life and probably would have plotted against the planet Earth in our minds. The following edition deals with that hypothetical analysis on how to destroy our Earth. I am going to drop the obvious impractical methods like being sucked by a black hole, stopping the spin, and other stuffs like helping Skynet becoming self-aware. Let us concentrate on the practical methods that could end the planet or at least, the life in it.

This is the most obvious answer to the question. In our day-to-day hostile encounter with the universe, we are so lucky that our solar system behaves with so much luck, helping the Earth to avoid any huge asteroid impacts. Even if our luck runs out, the impact would not end the Earth most of the time.

To destroy the Earth, we would need a bigger mass to smash it as hard as it can. Unfortunately, there are no bigger asteroids found in our solar system. The next logical thing would be to expect an asteroid impact at a very high speed. Though the mass is small, the high-speed impact can cripple the planet. All we need is to wait for that little piece of rock to hit the Earth with a momentous speed to overcome the gravitational binding energy of the planet (2.2 x 1032 Joules).

Alternatively, possible candidates like Mars or Venus could be substituted for asteroids for lower practical velocities inside the solar system. The result will absolutely be a catastrophe.

While this is not a practical method, it does margin close to a practical way, as we might be able to tractor an asteroid or a planet very soon (not really).

Working it out one chunk at a time

Railgun assisted launches are extremely feasible, but quite far from our reach. We could achieve 7 km/s these days with these guns. Therefore, this stands as the best viable tech with us for what is about to come. Form an alliance with your friends, family, neighbors, their family and their chain of friends and family. Dig up the Earth and use your shiny rail gun to shoot them into the orbit.  The downside of this plan would be the time it will take to shoot out all of the Earth’s mass (5.972 × 1024 kg). Even if the world superpowers unite and build thousands of railguns, it will not be sufficient to kill the Earth.

However, we are talking about machines here. Therefore, there is a great chance of this being possible, provided we have enough resources to build better rail guns and sales force to sell it to every human on the planet. It will take up some generations, but ultimately you will get rid of the habitable Earth very soon.

If all else fails, it is still a good bargain to wipe off this thing called ‘life’ from Earth.

Just like in the movies, create a super deadly lethal virus that’s super contagious and could kill any life in a few seconds. How that’s practical? Well, CRISPR will get you started. But you might need to start learning some serious stuffs for this to happen. Find some friends.

Let’s bring in the nukes to fasten up (and ease) the process. This is going to be really hard if there is going to be an opposition for this—you (and me) vs the rest of the humans. We’d definitely need to form alliances with corrupt generals in all the nuclear states to form a coup. Once that’s done, let’s hope we are damn lucky to get the launch codes for all the nukes.

Launch both the virus and the nukes to the key cities. Of course, the nukes won’t wipe out the life on Earth completely. That’s where the virus come in. It wipes the rest of the life before the nuclear winter or radiations could.

The coolest way to destroy the Earth is to create machines that replicate themselves, using the resources from the planet itself. This is the best and the only practical method to follow if we would like ‘life’ to survive elsewhere. Imagine a machine building itself, and it sets a spree of machines replicating themselves exponentially, eating up the Earth.

The easiest and the most practical way to destroy the Earth

Wait roughly up to six billion years, learning the virtue of patience. The sun, our only cute star, will expand into a red giant as it runs out of its hydrogen fuel. Maybe a few Earthlings might’ve fled to different systems by then. However, our goal of total destruction of Earth looks so promising in a few billions years from now.

Enjoy life, Earth, while they last.