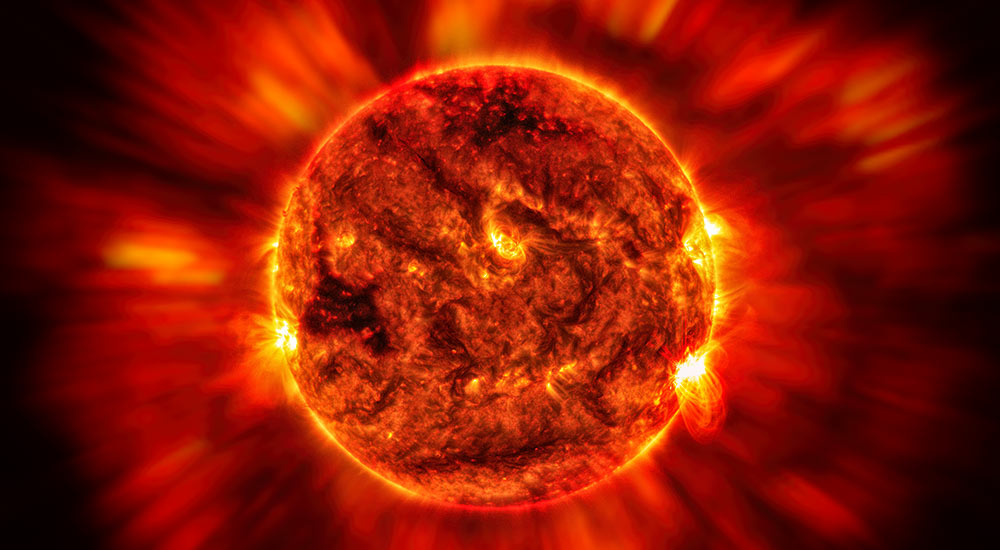 Solar flares are the sudden bright eruptive events observed on the surface of the Sun (photosphere) due to the reconnection and change in local magnetic fields. We designed this edition of Geekswipe to help you understand all about solar flares and the associated solar events like coronal mass ejection (CME) and coronal rain.

The fundamentals of the Sun

The Sun is formed out of a nebula that collapsed on its own gravity. As the core was formed with lighter elements, the heat produced due to the collapse and conservation of angular momentum initiated the nuclear fusion reaction in its core that fuses hydrogen into helium.

So deep down, the Sun’s core is at a constant battle (or balance) between gravity and the energy from the nuclear fusion at the core at all times. And inside the core, it’s just pure plasma with protons and free electrons. When these charges move up due to buoyancy and pressure, it forms a convection current. This movement of charges, aka current, creates a magnetic field outwards the Sun.

But the Sun rotates. And from the equator to the poles, the Sun’s angular speed decreases. As the Sun is just moving plasma, the speed of it also varies the same way. As the plasma moves towards the photosphere from the centre, along with the differential rotation domain of the Sun in whole, the magnetic field reacts to the change of speeds as well.

Due to this differential rotation of the Sun and the corresponding drastic movements of the plasma, the magnetic lines get ‘bent’. Instead of running from pole to pole, these lines get twisted, skewed, and slanted along the equator.

When further contorted by the movements, this concentration of the local magnetic lines at one particular region can tangle up closer, forming a barrier at the photosphere. This forms a layer or a barrier that slows down any further movement of the convective currents from the centre to that spot.

The barrier traps the light that comes from the core and prevents it from reaching out. And hence, these regions appear darker than the other areas of the photosphere. We observe these dark regions as sunspots. At these spots, sometimes, the plasma aligns with the magnetic field lines and put a staggering display of glowing plasma called the solar prominence — the loops you see in the featured image above. Sometimes the plasma condenses back to the surface. This phenomenon is known as coronal rain.

When the local magnetic fields come closer due to the movement of that particular spot, or other events, they snap and recombine violently. This magnetic reconnection event spews out energized charged particles outwards the Sun at high velocities. In other words, the magnetic field releases its energy to return to its lower energy state. These eruptions or explosions of solar mass due to the recombination of local magnetic lines are known as solar flares.

In the spewed out plasma, due to proton-electron interactions, the plasma radiates at the x-ray spectrum as a result of electron Bremsstrahlung.[1] And in very high energy flares, the protons and other nuclei in the plasma interact as well, radiating gamma rays. So even though solar flares radiates energy throughout the electromagnetic spectrum, from radio waves to gamma rays, we usually observe it (with the help of spacecraft like SDO, STEREO, and Hinode) in the soft x-ray and gamma ray spectrum. A typical solar flare releases around one-tenth of the total energy released by the Sun in a second. 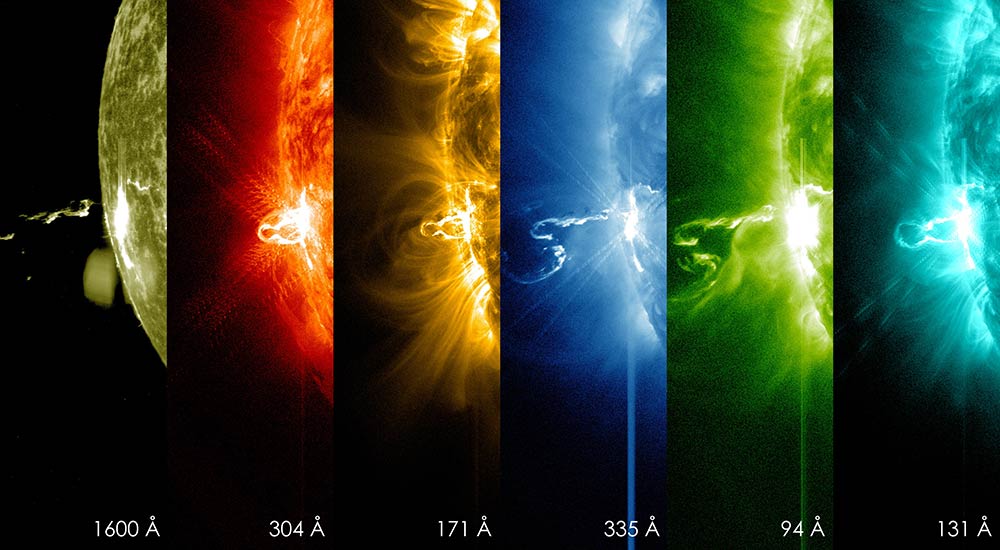 Major solar flare events that are classified as X-Class events spew out high energy protons and electrons along with radiation. When these high energy particles interact with Earth’s magnetic field and follow the lines back to Earth at higher latitude areas like Norway and Antarctica, they ionize our atmosphere, giving rise to the beautiful auroras.

When solar flares intensify and scale up huge by ejecting loads of plasma, they are called as the Coronal Mass Ejection. The main difference between solar flares and CME is that solar flares are relatively small, and are a quick and rapid release of high energy photons mostly, whereas CMEs are huge ejections of plasma, occurring over the course of hours, travelling slower than the solar flares.

CME travel with a huge magnetic cloud or bow shock, piling up high energy plasma in the downstream region of the leading edge. As the curvature is as large as 1 AU, CMEs have a larger chance of hitting the Earth. The impact of CME on Earth could be catastrophic as well.

In conclusion, solar flares are pretty dangerous. We’re just getting lucky every time as nothing huge is ever ejected our way. Let’s hope that stays same, and cheer our planet’s core to stay happy all the time.