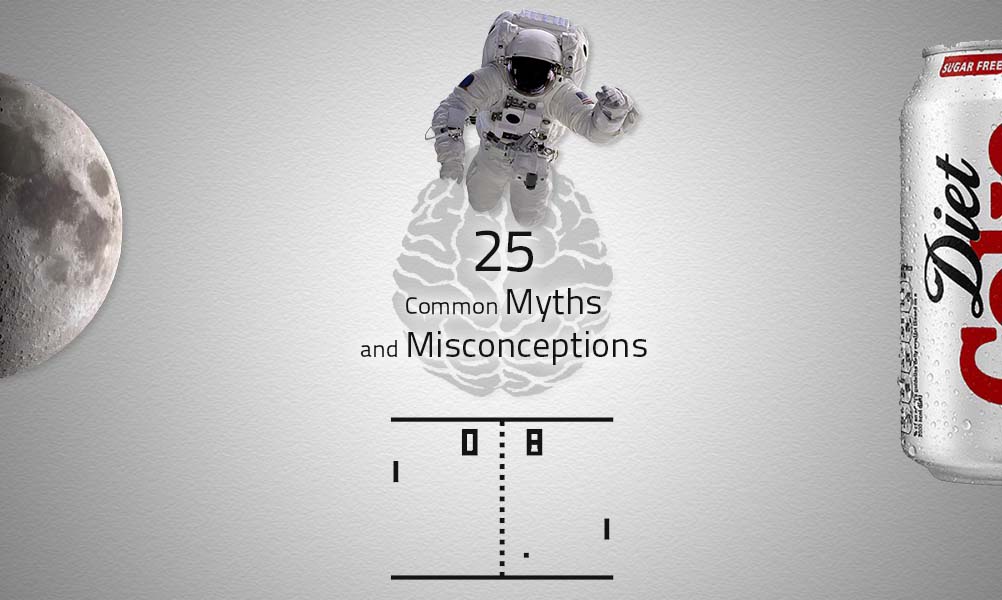 Imaging technologies like fMRI reveals that we use most parts of our brain one way or the other. If, seriously, we use only 10% of our brain, then how is it that any injury or damage to the brain inhibits our cognitive abilities, and other functions? It is evidently clear that more than 30% to 45% of our brain is active even in a neutral state and we’d like put it on the bucket of busted myths, thanks to Mythbusters.

There were games introduced long before PONG and they date back to 1940s when a few games like the Cathode Ray Tube Amusement Device, Chess and Nim were introduced.
The world’s first video game was claimed to be the digital version of tic-tac-toe, called as Noughts and Crosses, Introduced in 1951. OXO was developed by Alexander S Douglas for the EDSAC computer, and sadly it wasn’t available for anyone except the EDSAC (Only one existed at that time) users at the University of Cambridge. A decade later, in 1961 MIT three MIT students, Martin Graetz, Steve Russell, and Wayne Wiitanen, came up with a game, Spacewar!, for the mini computer-PDP-1 and is the first shooter game to be built. As there is a constant debate which would qualify as the world’s first video game, it is obvious that PONG isn’t a valid candidate in here.

Astronauts Would Explode Without Their Spacesuits

The chances of survival without the suit are nearly close to zero, but one would not explode in space! The vacuum boils your blood and you will lose all the heat in your body. Death by freezing? Absolutely. Death by exploding? Not a chance. But it does not matter anyway, because you will be unconscious due to lack of oxygen and you wouldn’t feel a thing.

The Coriolis Effect is a term coined to refer an inertial force that determines the trajectory of objects moving within the rotating frame of reference. It aids us in understanding how the rotation of Earth causes change in weather patterns, but please, the amount of water in your flush is too small to be impacted by Coriolis to determine whether it drains water clockwise or anticlockwise!

Dolphins Are The Smartest

Studies are still being carried out to discover the dolphin language, in which case it was never found. Turns out, many other animals beat dolphins in intelligent tests. Dolphins are adorable, but smartest? Not many scientists think so! It doesn’t mean that Dolphins are dumb! It’s just that Dolphins are not the ‘special’ smartest species on the earth as the myth has it.

Newbies, who got converted to vegetarian or vegan, often turn to processed food for help, which is full of carbohydrates, high calorie foods and high fat content items. Eating processed foods increases unnecessary salts and sugar in your body, not to mention increase in your body weight and risk of chronic illness. Without a healthy balanced diet, a vegetarian diet is not better than meat, in any way.

Blood picks up oxygen from your lungs and circulates throughout the body. It then returns back to the lungs and the cycle goes on. Throughout the process, the color of the blood remains red! It is the veins that are blue, thanks to the trick of light incidence on them. Sometimes your skin turns blue and that is purely because of cyanosis, which is the oxidation of heme in hemoglobin that turns it into brownish methaemoglobin.

There are only a handful of studies that have tested this claim rigorously, and those studies reveal that skipping breakfast has a very little to no impact on weight gain.

All Acids Burn Your Skin

Innumerable types of acids exist and most of them are not characteristic enough to burn your skin or disfigure them. We consume Vinegar and Citric acid in our food. Even they are acids, yet harmless. However, some acids like sulfuric and nitric acids are corrosive in nature, capable of burning your skin.

Being hundreds of miles long, it is a common misconception that the Great Wall of China is visible from space. Even in the low-earth orbit, it is impossible to see it with a naked eye.

Oh that poor creature! Bats have eyes and they are definitely not blind. It is just that they rely on their sense of hearing and smelling a lot. In fact, they use advanced sound based system called Echolocation which helps them maintain their bearings to hear at nights.

Mount Everest is The Tallest

A mountain is measured highest in regard to how far it soars above sea level. Technically, Mount Everest is tallest from base to summit. But Mauna Kea kills it to the top spot, at being the tallest.

Making Egg Stand On Its Head On A Spring Equinox

This is the most ridiculous myth ever. Equinox has nothing to do with this and it is just the day and night is of equal lengths during that time. Any skilled hobbyist or an egg handler can stand an egg in its head on any day of the year. Spring Equinox is only a myth!

When fat is removed from a product, its sodium and sugar content increases. Fat is necessary for the proper functioning of human body. They absorb vital minerals and regulate hormones. As long as you don’t want to develop type 2 diabetes, you might just wanna stay away from “fat free”, “low fat” food items.

Many chemicals synthesized in laboratories are the same as that of the ones produced by nature. Cyanide is a natural substance, and it’s fatal at a dose of 100 mcg. Botulism is also natural, but is capable of killing half the people in city. On the other hand, prescribed drugs are known to elevate life expectancy. Synthetic chemicals are synthesized not from any fantasy world, but from the natural resources of the real world, that is already in its original form.

Cats and Dogs Sees in Shades of Gray

Dogs have wider range of vision than humans. Cats and Dogs see in blue and green, they certainly are not shades of gray!

Diet sodas may have lower calories than regulars, but the artificial sweeteners used in them however add on pounds. People who consume diet drinks are studied to exhibit great weight circumference than those who do not consume them. Still they don’t seem to be a valid argument.

Centuries old fictional stories are enough to make one go nuts. Multiple studies and investigations have shown that there was no substantial links between phases of Moon and aggression, murder and insanity. Though it is a myth, the only valid point we can put on this is that the full moon light provides the support for crimes to happen in darker areas. Free light ;)

Acute stress can cause temporary increase in blood pressure, but it does not lead to hypertension. Habits like smoking and bad diet, hereditary genes does!

There is no such thing called photographic memory, only good memory. Even people with exceptional memory cannot recall visual with details as precise as a camera.

No Gravity in Space

What the hell? Of course, there is gravity in space. It is what keeps the stars to orbit the center of galaxy. The reason why astronauts feel weightless is because they are orbiting around earth and are falling towards it. They keep falling, but they never land. Centripetal Force ;)

I am sorry penny, but your aerodynamics do not make you dangerous enough to kill a person even if you are dropped from the top of Empire state building, however you may actually end up causing striking pain at the point of incidence.

To all the geniuses who still believe that lightning doesn’t strike the same place twice, you should probably experiment by standing under a tree or a tall building. Tall buildings get struck by lightning, hundreds of times a year!

Evolution Only Improves The Species

Survival of the fittest is a fact. A lot of organisms have evolved, not necessarily better. However there are cases where imperfect organisms have survived. Species of fungi, mosses have all remained same for centuries and have adapted to survive.

The Dark/Far Side of The Moon Is Actually Dark

The sun illuminates every part of moon at some point. It is just that the other side of the moon is not visible from earth’s surface. This is caused by tidal locking, which causes moon to take long to rotate its own axis as it does to revolve around earth. Obviously, you could always see only one part of the moon every time and a tiny part of the far side due to libration, which makes about 59% of the moon visible.