Deep-Sea Organisms Are Affected by Plastics Too

Plastics are contaminating almost every ecosystem in this world. Following the findings of plastics around Antarctica, experiments from a study now have confirmed that microplastics are transferred into deep-sea organisms through their feeding methods.

The contamination of macro-plastics is already alarmingly prevalent and can be found affecting marine lives in large scale. You could’ve seen the disturbing pictures of seabirds and turtles that are stuck with plastic, and even some horrible images of plastics ingested by them. This study has now shown the public how microplastics have affected aquatic life in the deep realm of oceans (334–1783 m deep in the equatorial mid-Atlantic, 954–1062 m in the south-west Indian Ocean), which were once assumed as one of the unpolluted regions in the world. 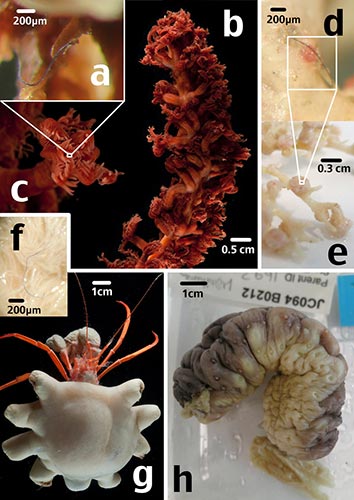 Organisms found to have ingested microfibers. Image by M. L. Taylor | CC BY

Dissections also have shown that most of these organisms have a trace amount of microfibers both internally and externally. According to these researchers, without enough experiments, the long-term ecological impact of microplastics on the marine life cannot be studied in-depth.

But it appears that there is a scarier possibility for biomagnification here. Though only trace amounts of microplastics have found its way to the deep oceans, still it is something to worth note that the source of this contamination is our ecosystem.