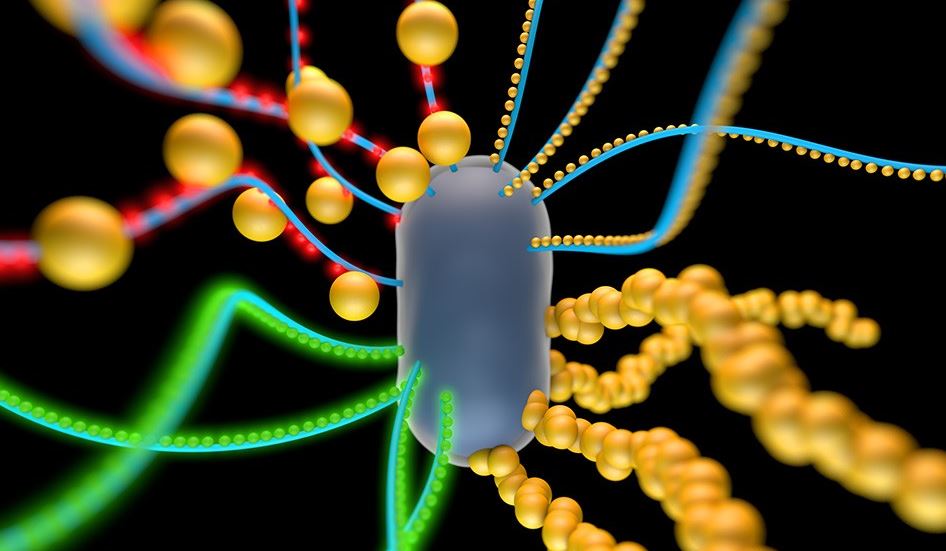 The hybrid living materials can be combined into colonies that incorporate more nonliving materials to produce a chain of conducting nanoparticles, which practically is applied to be a bio wire that conducts electricity or light through it. The reactiveness of these materials to the environment makes them a potential target for such applications like solar cells, self-healing materials and more.

One of the researchers, Michelle Lu and his colleagues synthesized this hybrid living materials, from the common bacterium E. Coli. E.Coli produces biofilms naturally, which in turn helps the bacterium to attach itself to surfaces. The protein that helps in attaching the bacterium to surfaces is called as ‘curli fibers’, made up of subunits called as CsgA. By modifying these subunits by adding peptides, the bacterium is made to capture nonliving materials into the biofilms. The synthesis further extends by controlling the bacterium to produce several types of films based on different conditions. This was achieved by inhibiting the bacterial cell’s capability to produce the CsgA protein subunit. They replaced a genetically engineered circuit with AHL molecules (molecules involved in bacterial communication). The cells are also engineered to change the biofilm’s composition by communicating with each other.

The engineered E. coli are then modified to produce network of long rows of gold nanowires for electric conduction. These nanowires are created by engineering the E. Coli to produce the CsgA with peptides of clusters of the amino acid histidine, only at the presence of a molecule called aTc. By varying the levels of AHL and aTc the composition of the biofilm can be controlled. The histidine will stick with the gold nanoparticles, as they will be left untagged, in the presence of AHL and aTc. When the cells are designed with untagged CsgA and AHL, the other cells are stimulated to produce histidine-tagged CsgA.

When the cells are engineered with a different curli fiber with peptide tag called, SpyTag, it binds with SpyCatcher, which is a protein that coats the quantum dots.

This work is believed to have wide range of applications from production of biofuels from agricultural wastes, diagnostic devices, and tissue engineering structures.