Reply To: Rotating Artificial Gravity Centrifuge On a Horizontal Plane?

The ‘feel’ of gravity on a spaceship’s centrifuge (like that station you’d see in 2001: A Space Odyssey or Hermes from The Martian) is because of the centripetal force exerted by the centrifuge. Any occupants inside the centrifuge would then experience the centrifugal force, which they perceive as ‘gravity-like force’.

The reason why you see centrifuge concepts that has the longitudinal axis of the spaceship as its axis is could be attributed to convenience and convention.

In space, there’s no sense of any direction. Whichever way gravity pulls us, we call it ‘down’ and the opposite side as ‘up’.

For a spaceship, there are three primary axes and hence three possible configurations. For the following cases assume that the centrifuge is in operation as the spaceship accelerates.

In this case, we have a centrifuge like the Hermes. In the figure below, the axis of the centrifuge, the longitudinal axis of the ship, is passing out of the screen towards you. 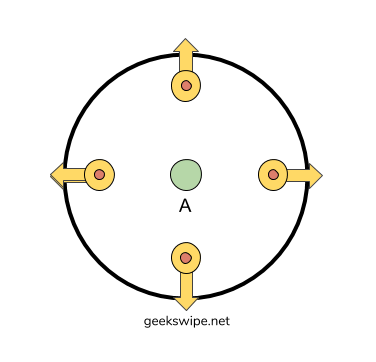 Here, we’d experience the ‘artificial gravity’ radially outward from the ship, as the walls of the centrifuge exert a centripetal force on the occupants.

And in this case, our ‘down’ is always facing away from the ship at all points. When you look ‘up’ you will always see the centre of the spaceship.

And if the whole ship needs accelerate temporarily by firing its thrusters, the occupants of the centrifuge, at any point, would feel an inertial force acting to their side and it won’t be affecting their ‘down’.

In this case, consider the centrifuge to be mounted on either side of the spaceship as it rotates with the ship’s lateral axis as its axis. Think of it as a spaceship with two centrifuges (like wheels) on either side. 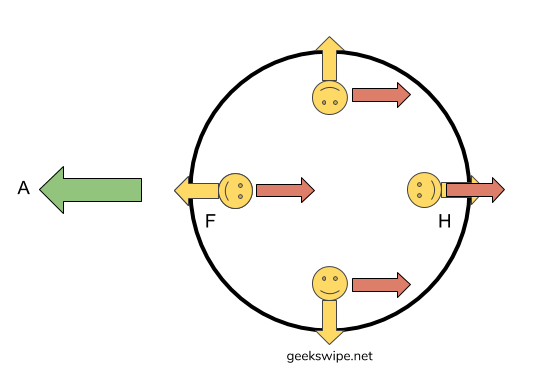 In other words, as the spaceship accelerates, your ‘down’ and ‘up’ are affected as the ∆v causes an inertial force that adds varies your inertial force perceived at F and H.

Like you’ve mentioned in the question, If the centrifuge runs around the spacecraft—with the normal axis of the ship as its axis, the experience would be similar to that of case 2, except in a different plane.

I guess this is one of the reasons why case 1 (longitudinal axis) is the preferred choice of configuration. But in any case, if the ship decides to fire the thrusters and accelerate, the centrifuge will be stopped, locked, and the crew will be asked to strap into their stations. In that scenario, the configuration doesn’t matter, as the only acceleration will be from the ship’s propulsion and you can orient yourself to it—which is also a type of ‘artificial gravity’.

I’d call case 1 as the safe choice for engineering reasons too. Configuring the centrifuge along the longitudinal axis doesn’t subject its walls to varied stress, unlike the other two configurations. In this type, the stress from the inertial forces are uniformly distributed, even when the centrifuge is in operation. Hence configuring it along the longitudinal axis eliminates or minimises structural failures during planned and unplanned acceleration events.