Watch Dogs – The Good, the Bad, and the Ugly 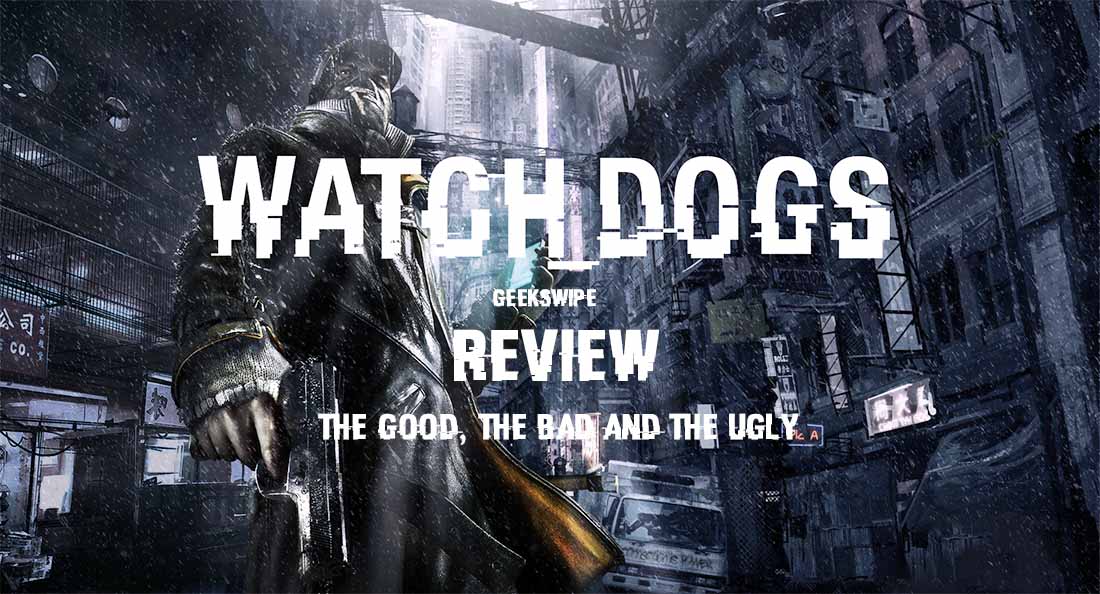 Ubisoft worked on Watch Dogs for almost five years, and I still couldn’t find the reason why it took so long for them to develop an open world game this bad. Not to mention that they opted for a completely new engine for this. And as expected, the final game was seriously downgraded from what they showed at E3.

You enter a familiar open world game as Aiden Pearce, where you are equipped with tools to hack and interact with various objects around you. And as expected from Ubisoft, you get to climb the ridiculously designed buildings to unlock some towers to get access to the map of some area. With these minor annoyances aside, the characters are really well written for the plot and supports the gameplay.

Ubisoft  had done an awesome job in bringing up the entire Chicago city inside the game. Kudos! For what it’s worth the creative assistance from the Kaspersky Labs saved the game from being a cringe-fest game version of the movie ‘Hackers’. The futuristic ‘digital dystopian world’ (?) is well-balanced within the scope of realism and creative freedom. Though the plot clashes with logic at times, it is better, and for most of the part, it’s Aiden-centric.

If there’s anything that holds this game, it’s the story.

Side missions, Wi-Fi hacks, and some cool leisure activities in and around the digitally dominated Chicago provides little off certification for the bored explorers. Stealth missions are okay for a normal player, and it would be the best if the AI could be more realistic and challenging. After ten minutes of contemplation, that’s all the good part I can draw from the game!

It’s the driving! The driving! Aaah! The driving physics and realism are horrible. One would start screaming the very first time you get into a car and start to drive in Watch Dogs. If you are used to driving in GTA, you’ll be let down for sure. In Watch Dogs, it’s more like driving a vehicle strapped with tons of invisible steel and concrete under its chassis. It would’ve been a little better if the wheels were a little drift-friendly for those awesome drifts we’ve experienced in other open world games. 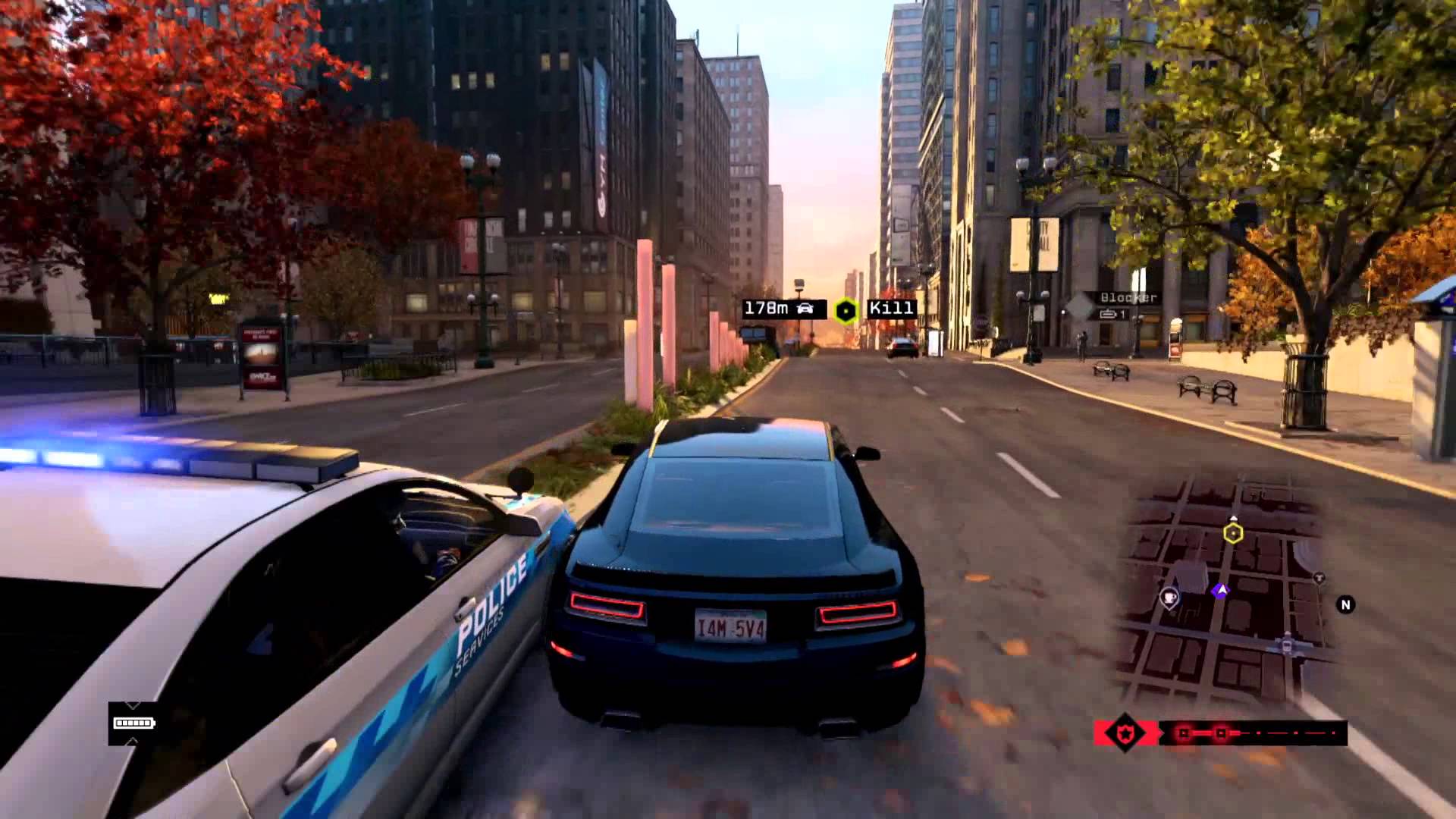 Those thing feels like a tank on four wheels!

The destruction physics don’t even exist! You crash into the poles, a truck, a car, and run over some pedestrians, but you can barely notice a single scratch on those shiny surface. The car wrecks and visible damage comes only after some ten or twenty heavy crashes. Not only this model is unrealistic, it kills the reality, even from a game world’s perspective.

Lack of air planes and helicopters is another big blow to the open world expectations. The grandness of the game could’ve been pushed up a notch by giving the player, a chance to explore the magnificent map from the air. At least a wing suit would’ve been nice, considering Ubisoft’s Far Cry 3 had one. Instead of too much focus on racing, wingsuit and gliders could’ve made side missions interesting.

The fixer contracts are okay in the beginning and as the game progresses, the primitive AI, repetitive themes, and the horrendous driving mechanics make it worse and sucks out the colour out of the progression. It soon becomes an annoyance that stays until you finish them.

Though hacking around and shooting down NPCs are fun, the open world still is restricted and not that open as the popular one’s like Los Santos or Liberty City. The game world could have been a lot better if they had more intractable areas where you could enter and explore without requiring any missions or tower unlocks.

Ubisoft created an exclusive open world game engine, Disrupt, for this game and somehow they messed up the little things when it comes to the NPCs. I started the game in realistic mode expecting some heavy challenges down the game progression. Unfortunately, the game disrupted my heart again with a poorly responsive AI map. They were too far from realistic.

In the mission ‘Backseat Driver’ where you are supposed to escape from the cops, this blunder can be witnessed in a rather funnier way. The AI is too predictable. You can try this by honking your car right when you leave the alley. The police NPCs won’t even flinch a bit to the mysterious blaring horn from the alley. 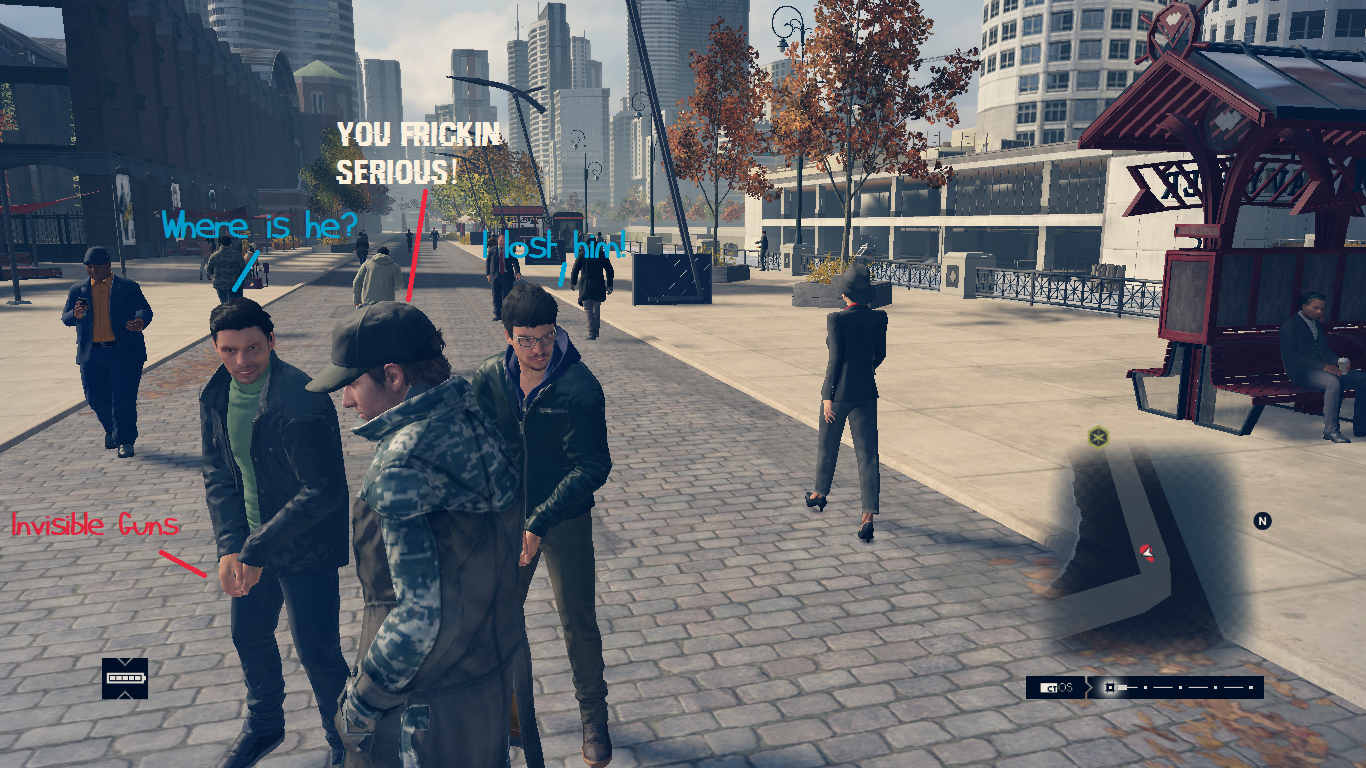 And this masterpiece is from another mission where the guards are supposed to find Aiden.

Let’s talk about those shiny graphics they promised at the demo day! As a PC gamer, I’m terribly disappointed with the graphics in the end product. The quality of the game is so poor compared to the demo. Ubisoft, in the name of optimization, massively streamlined and downgraded their original graphics. This is obviously an effort to suit consoles and other low-end systems, to provide that multiplatform delivery. Disrupt engine’s performance is sad. Poor reflections (or no reflections but one fake texture copy pasted all over the city), transparent stairs, laggy draw distance, and inaccurate shadows, the game engine is definitely not a ‘revolutionary next-gen graphics’. Far Cry’s Dunia is relatively better when compared to this blunder.

In conclusion, Watch Dogs reigns as a true modern open world game with a good writing and solid characters all complimenting a good plot, while failing technically with a half baked and chaotic game engine that ruins the fun for everyone.